Common Diving Petrels return to Marion Island after the eradication of feral cats, but are presumed to be at risk from House Mice

Above picture: A Common Diving Petrel in the hand of a permitted researcher on Marion Island; photograph by Stefan Schoombie

Maëlle Connan (Marine Apex Predator Research Unit, Institute for Coastal and Marine Research, Nelson Mandela University, Gqeberha, South Africa) and colleagues have published in Ostrich Journal of African Ornithology on the recent recolonisation of Marion Island by Common Diving Petrels Pelecanoides urinatrix, over three decades after the eradication of feral cats Felis catus in 1991.  The cats were introduced in 1948 and are thought to have caused the diving petrels’ extirpation soon afterwards.

Lead author Maëlle Connan writes to ACAP Latest News:  “Further work is needed to understand the reasons for the low hatching success observed and whether predation by House Mice Mus musculus mice may be a contributing factor”.

Mouse-Free Marion Project Manager, Anton Wolfaardt says “It’s wonderful that the previous eradication of feral cats has led to the recolonisation of the island by Common Diving Petrels.  We know from previous research that House Mice decrease the breeding success of several burrow-nesting seabirds on Marion Island and may well be contributing to the low hatching success of the Common Diving Petrels.  The removal of mice will help facilitate a proper recovery of the many populations that were impacted by cats, and whose restoration is being impeded by the impacts of mice.” 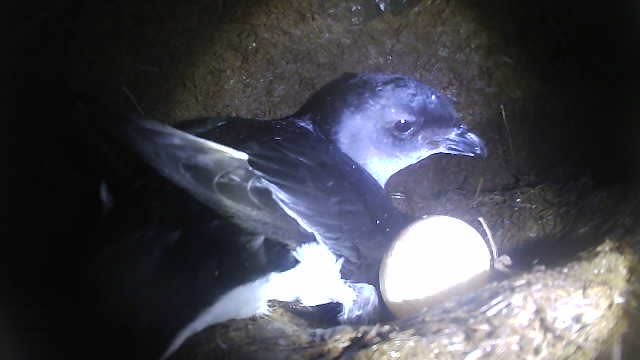 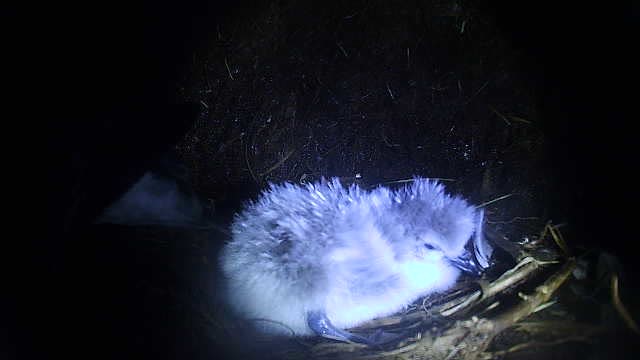 At risk to mice?  Burrowscope photographs of a Common Diving Petrel adult alongside its egg (top) and a chick (bottom); photographs by Stefan Schoombie

Nocturnal burrow-nesting seabirds are notoriously difficult to study and can go unnoticed for years in remote areas.  One of these species is the Common Diving Petrel Pelecanoides urinatrix, which has a circumpolar breeding distribution in the Southern Ocean, including at the sub-Antarctic Prince Edward Islands.  At Marion Island, the larger of the two islands, the species was extirpated by cats that were introduced in 1948.  The cats were eradicated by 1991, and Common Diving Petrels were discovered in burrows in coastal Poa cookii (Cook’s tussock grass) on a steep south-facing slope in Goodhope Bay during April 2015.  Subsequent surveys in October 2015 and February 2016 confirmed breeding over a 1-ha area.  In 2019/2020, breeding phenology and success was studied in 36 nests at the same site.  Birds called from their burrows from mid-September, laying started in early October, and the first chick was observed on 20 December.  Hatching peaked in early January and chicks fledged from the end of February to mid-March.  This breeding phenology is similar to that at the neighbouring Crozet Archipelago.  Overall nest survival was 46.4 ± 9.2% (mean ± SE; 95% CI: 29.5–64.1%), with most failures happening around hatching time.   Further monitoring is needed to assess whether introduced House Mice Mus musculus contributed to the low hatching success.  Common Diving Petrels were discovered breeding in other coastal areas, mostly in the south and east of the island. It is unlikely that breeding by this species was overlooked for three decades, suggesting that the elimination of cats allowed Common Diving Petrels to recolonise the island.”