Featuring Marion Island’s albatrosses and petrels affected by mice and their photographers: the Grey-headed Albatross by Kim Stevens

NOTE:  This post is the third in an occasional series that aims to feature photographs of those breeding seabirds of Marion Island which are being attacked by mice, along with information about their photographers.  The aim is to introduce the photographers (and the birds) to readers in such a way as to explain the passion that they, and all the members of the MFM Team, feel for the island.  Here, Kim Stevens, currently on Gough Island in the South Atlantic, writes about her PhD research on the globally and regionally Endangered Grey-Headed Albatrosses Thalassarche chrysostoma of South Africa’s Marion Island in the southern Indian Ocean. 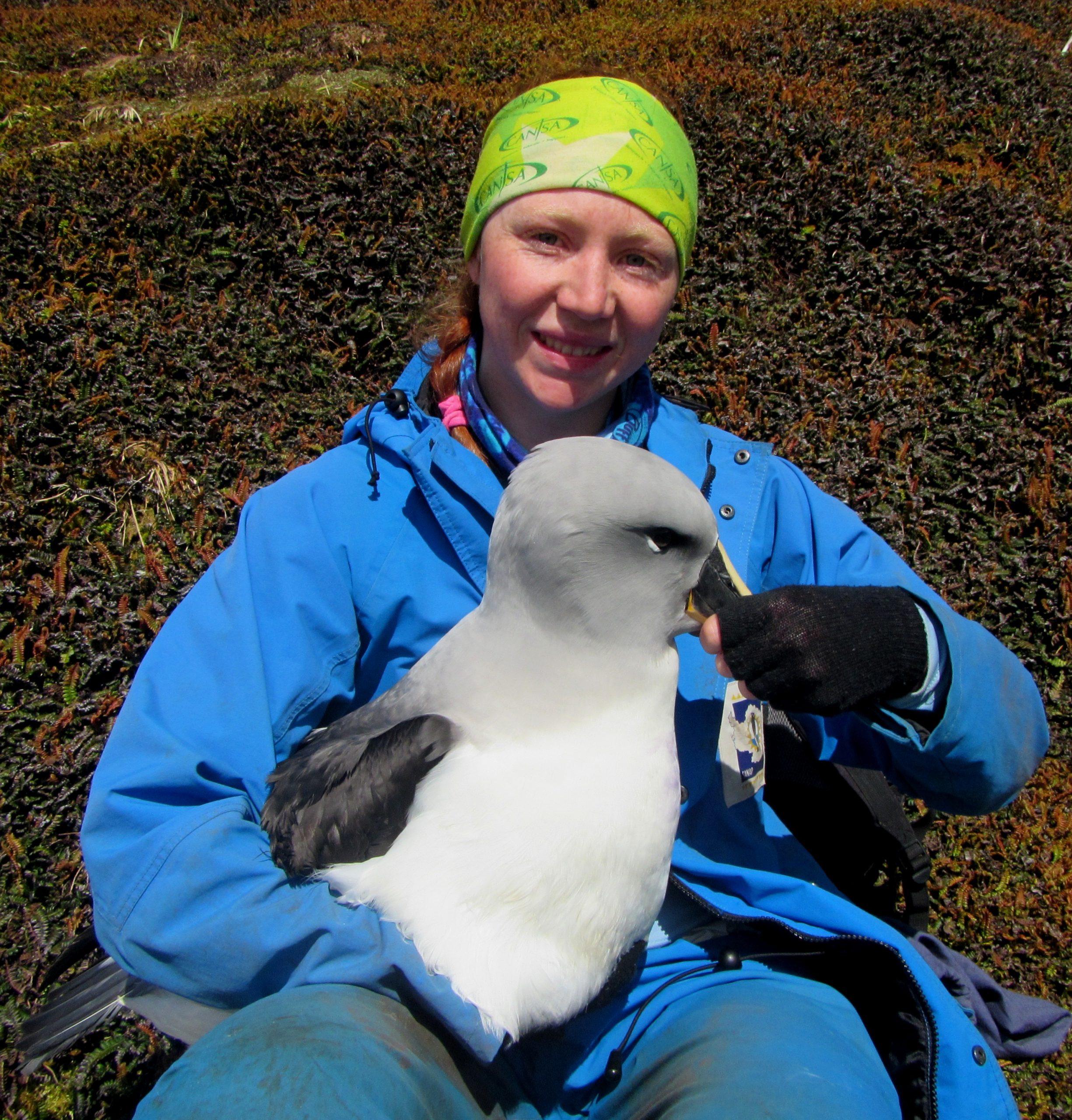 Kim Stevens carefully restrains a Grey-headed Albatross. All research on seabirds on Marion Island is conducted under a research permit issued in terms of the island’s management plan; photograph by Jess Berndt

My journey with seabirds began in 2013 when I hopped on to South Africa’s Antarctic research and supply ship, the S.A. Agulhas II, and headed south for a year-long expedition as a member of the 70th Overwintering Team to sub-Antarctic Marion Island (M70).  Unbeknownst to me, this adventure would turn into a deep love for seabirds and the special places they inhabit.  Before this, I did my undergraduate degree in Marine Biology and Ocean and Atmosphere Science, followed by a BSc (Hons) in Zoology at the University of Cape Town (UCT).  Upon seeing a job advertised to work as a seabird field assistant in the sub-Antarctic, I could not resist applying. 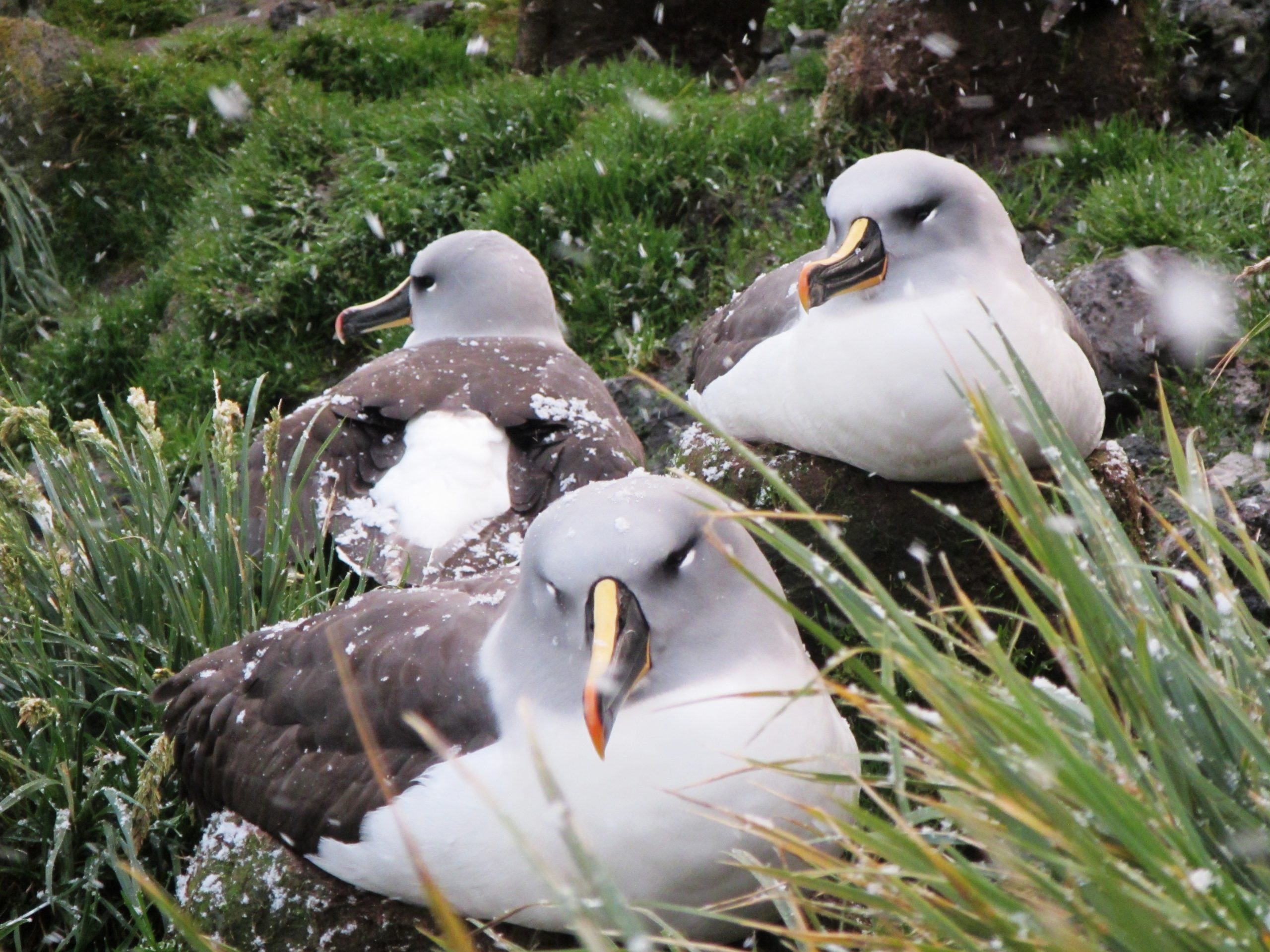 Not always good weather for both bird and researcher: incubating Grey-headed Albatrosses in a snowstorm

At Marion Island I spent the year working on several albatross, petrel and penguin species, with a specific focus on the Grey-headed Albatrosses – deploying geolocation and GPS tracking devices on them to understand where they go at sea during and outside of their breeding season.  These data formed part of my MSc, which I later upgraded to a PhD with UCT’s FitzPatrick Institute of African Ornithology to incorporate an analysis of the species’ long-term population dynamics.  A few months after upgrading I returned to Marion Island for a second expedition over 2016/17 (M73) to collect more data.  It was on this second expedition that I was unfortunately greeted by many a Grey-headed Albatross chick with large wounds inflicted by introduced House Mice Mus musculus and it was part of my job to record and monitor these interactions.  It was difficult to see these chicks, so close to fledging and so badly affected by mice. 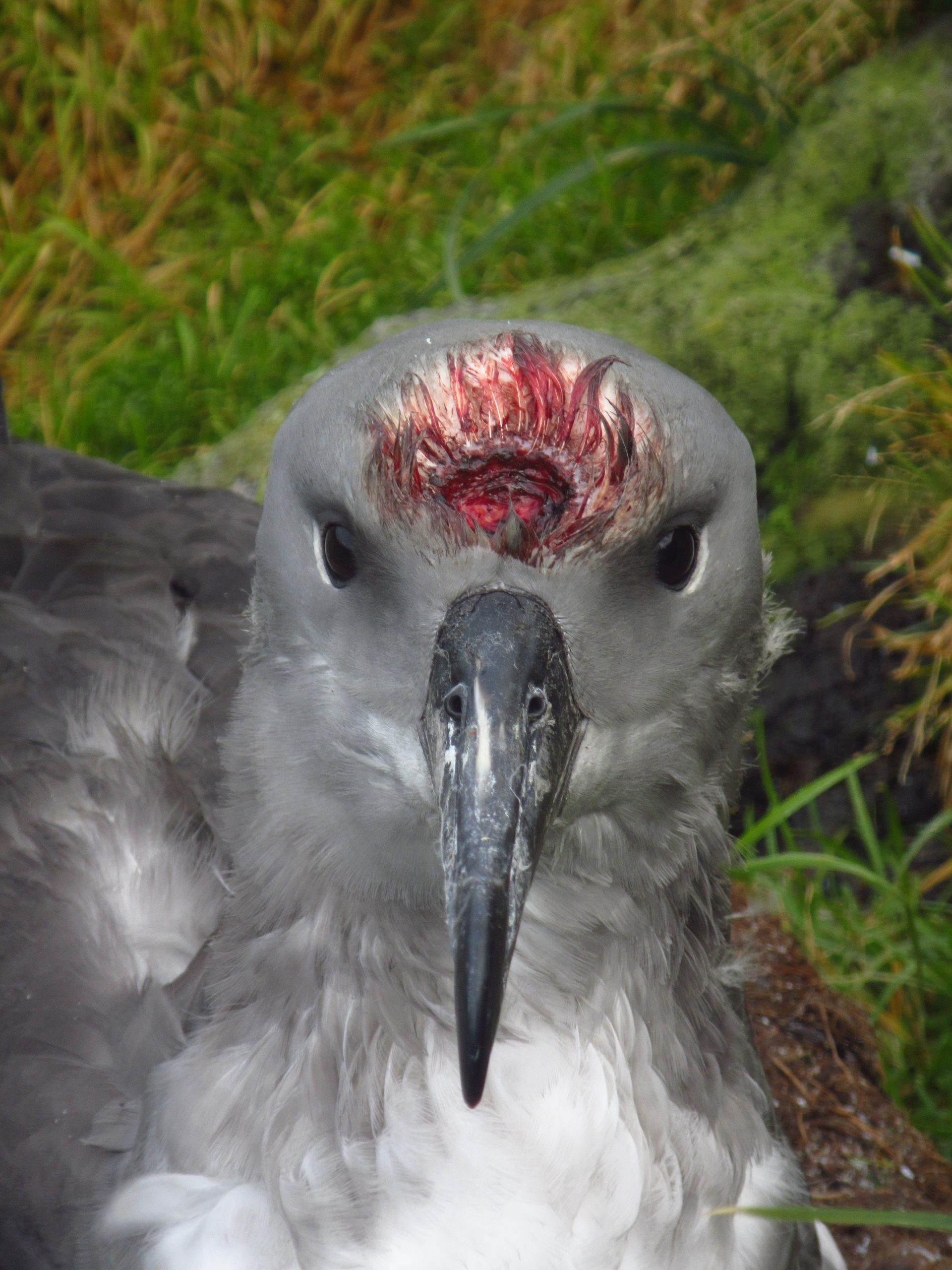 Right between the eyes: a Grey-headed Albatross chick has been badly wounded by House Mice at night 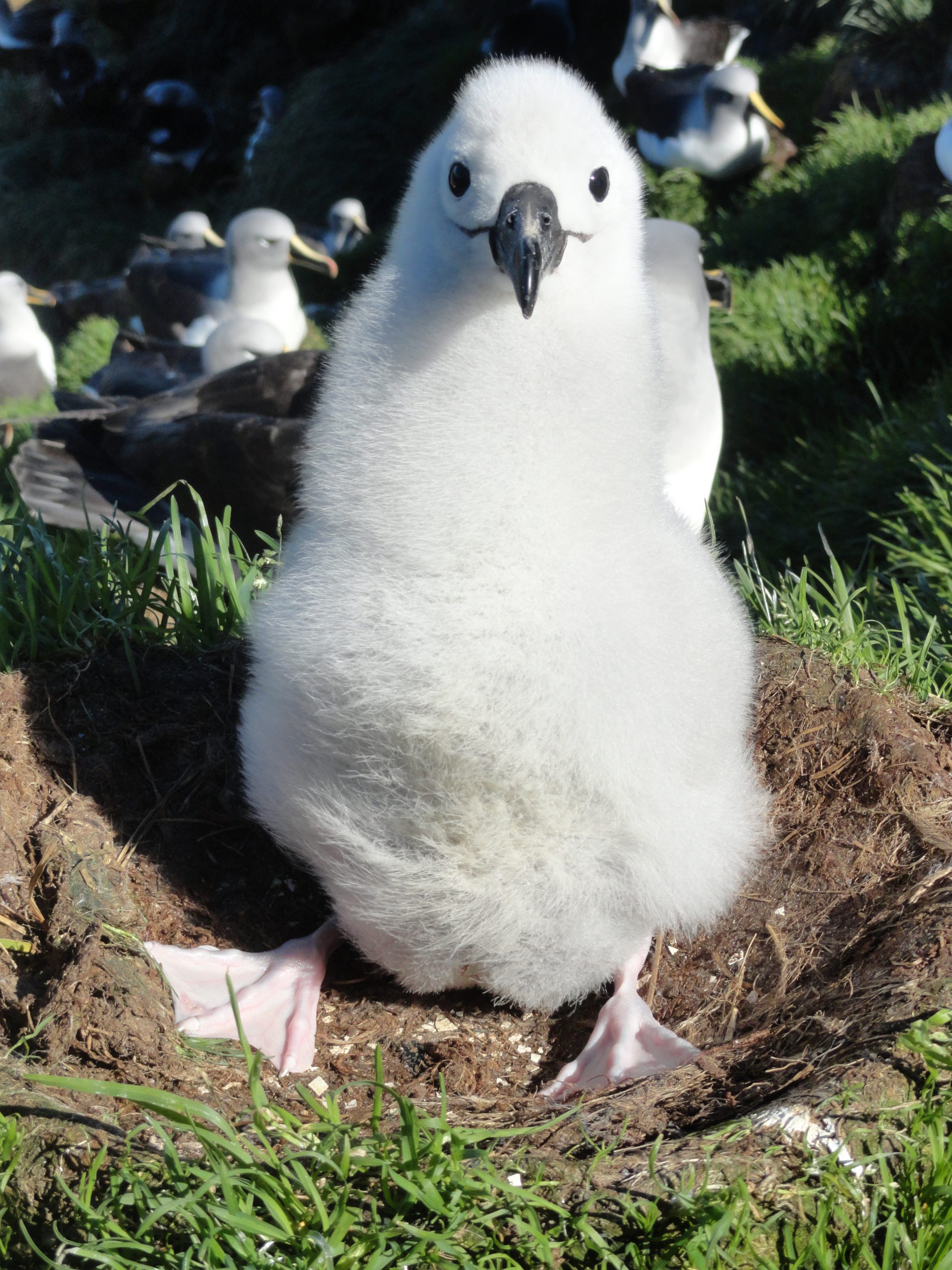 Since then, I have continued my PhD journey grappling with data, with some short sea-birding stints in between, including volunteering as a seabird observer for BirdLife South Africa’s Atlas of Seabirds at Sea (AS@S) on a winter research cruise to the Antarctic sea ice.  I also assisted researchers from the South African Department of Forestry, Fisheries and the Environment (DFFE) counting and deploying tracking devices on Snow Petrels Pagodroma nivea and Emperor Penguins Aptenodytes forsteri in Antarctica. 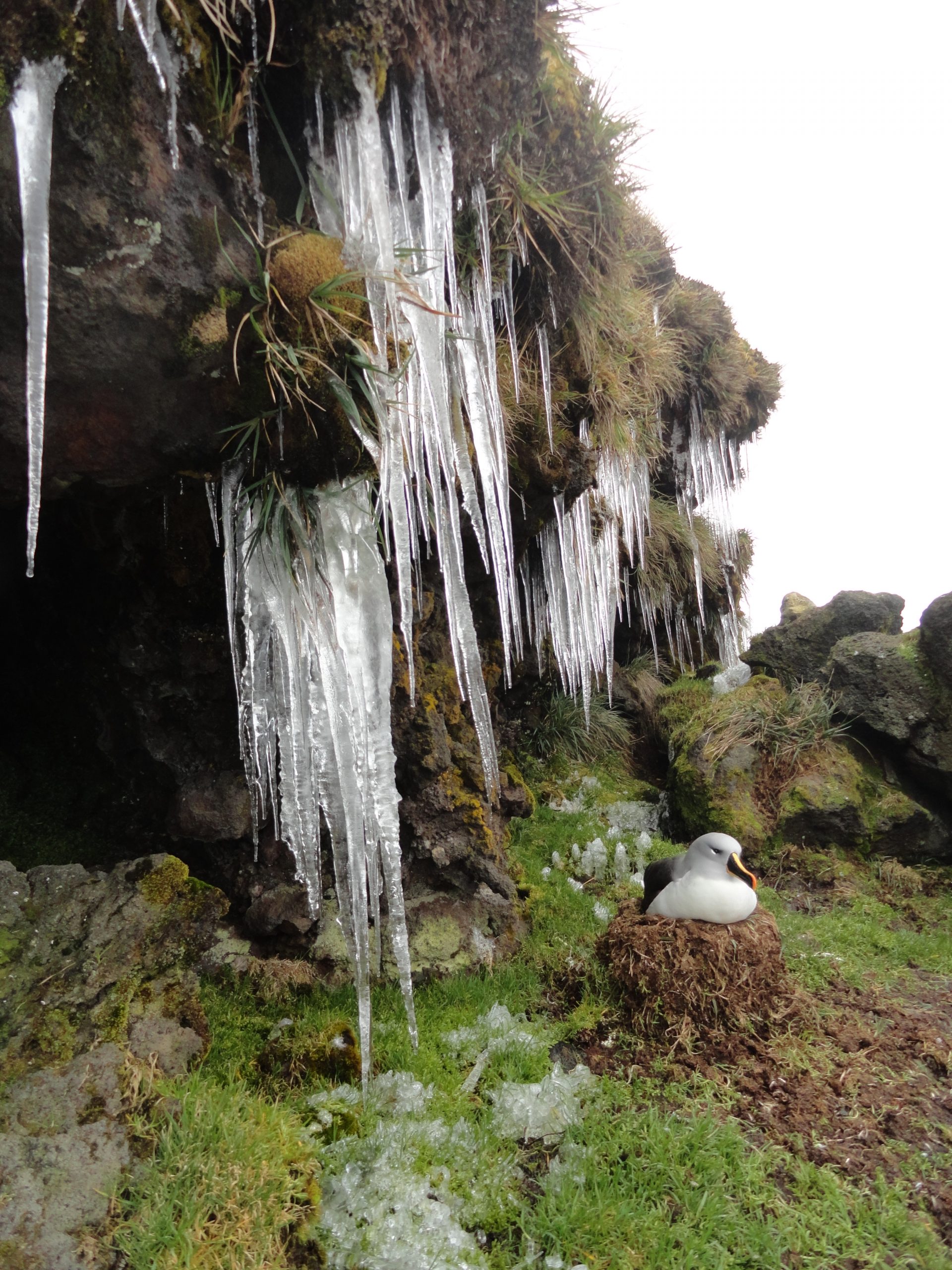 Icicles frame a Grey-headed Albatross on its nest

When the exciting opportunity arose to play a role in the Gough Island Restoration Programme (GIRP) to rid that island of its albatross- and petrel-attacking House Mice and protect its many threatened seabird species, I put my PhD on hold.  I am currently working for a two-year stretch as the Senior Field Assistant for the Royal Society for the Protection of Birds on Gough.  And now that the project is in its final phases, we wait with bated breath for the final confirmation of the success of the project, which will be at least two years from now, and to monitor the recovery of the affected seabird populations.  It has been an invaluable experience and the knowledge learned through this project will inevitably help the seabirds of Marion Island, which include the wonderful Grey-headed Albatross. 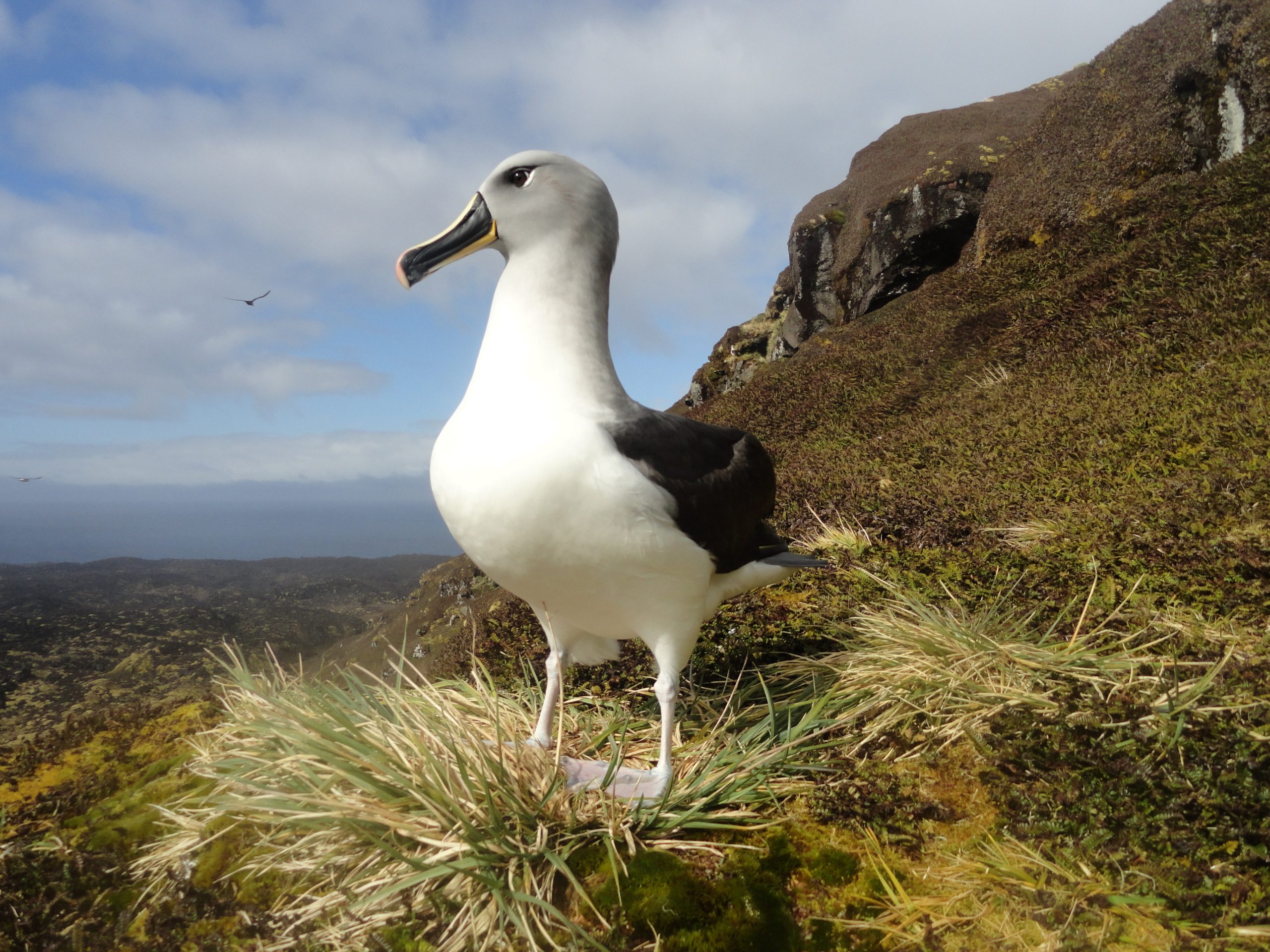 A study animal one can easily love. A Grey-headed Albatross stands proudly on its cliff-side home. All photographs by Kim Stevens