Featuring Marion Island’s albatrosses and petrels affected by mice and their photographers: the Grey Petrel by Bruce Dyer

Above Picture:  An incubating Grey Petrel momentarily exposes its egg laid in a rocky crevice during a nest check under research permit near Duiker’s Point, Marion Island; photograph by Bruce Dyer

I have always had an interest in wildlife from a very young age.  I was introduced to the sub-Antarctic at Marion Island on a relief voyage back in 1977 when aged 20, complete in orange corduroy bell bottoms and a very un-waterproof anorak.  I recall being enthralled by the tame wildlife and the beauty of the wild but nippy environment.  My career with seabirds though began a little later in 1986 at the South African Department of Fisheries, Forestry & the Environment (DFFE; then called the Sea Fisheries Research Institute), where I worked for the rest of my career until retirement in November 2021. 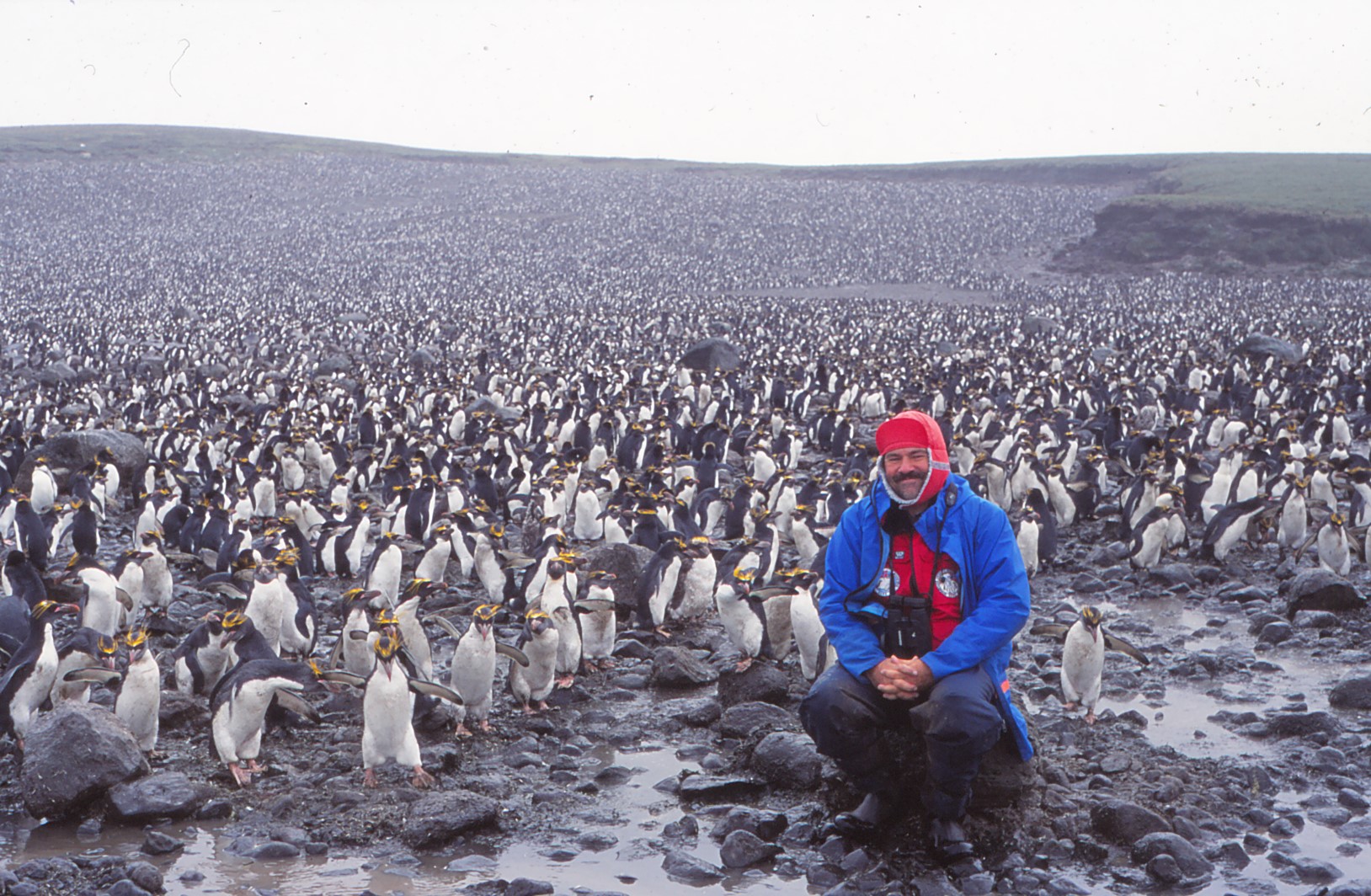 Bruce Dyer takes a breather on the edge of a very large Macaroni Penguin colony at Kildalkey Bay on Marion Island; photograph by Nico de Bruyn

I was rewarded when my nagging that our department should consider setting up a long-term seabird monitoring programme at the Prince Edward Islands bore fruit in 1994.  Strange that the first seabird seen at dawn in 1994 with Marion Island in view was a Grey Petrel Procellaria cinerea, a seabird I had not previously seen with my burgeoning interest in birds.

The main aspect of our programme was to monitor aspects of the breeding biology and foraging ecology of Macaroni Eudyptes chrysolophus and Gentoo Pygoscelis papua Penguins and to record beach debris as part of South Africa’s contributions to the work of the Commission for the Conservation of Antarctic Marine Living Resources (CCAMLR), to which South Africa is a signatory nation.  Further aims were to provide biological information for all Marion’s 15 surface-breeding seabird species and basic monitoring of the 14 burrowing petrel species, affectionately referred on the island as ‘nightbirds’.  Additionally, population estimates, breeding success, at-sea tracking and diet sampling are monitored annually for the four breeding albatrosses and two giant petrels, with data shared between DFFE and the University of Cape Town’s FitzPatrick Institute of African Ornithology.  The monitoring of burrowing birds includes the summer-breeding White-chinned Petrel Procellaria aequinoctialis; more recently the much rarer and winter-breeding Grey Petrel was added to the programme.  The data from this monitoring are sent to the Agreement on the Conservation of Albatrosses and Petrels (ACAP), to which South Africa is a founding Party.  Our programme eventually took over all the university’s long-term projects to keep these invaluable data sets running.  Bird strikes through light pollution and with radio antennae at the huts are also recorded. 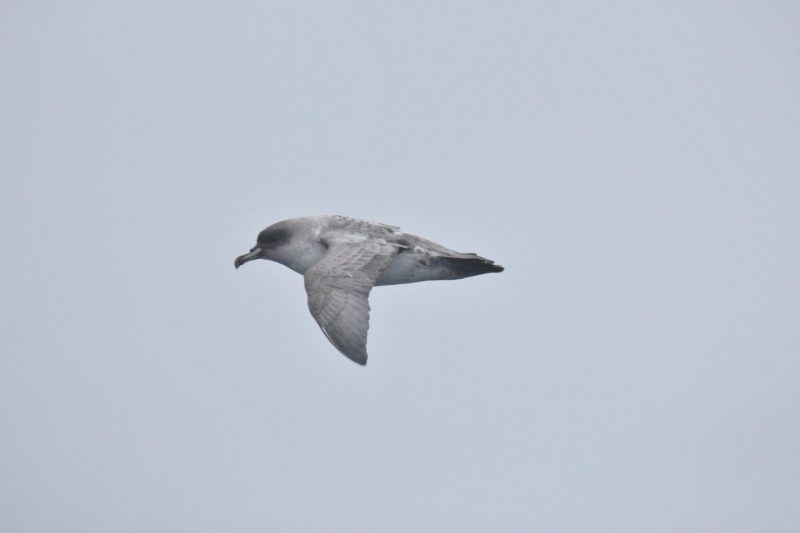 A curious Grey Petrel at sea approaches the ship off the Prince Edward Islands; photograph by Bruce Dyer

Visits to neighbouring Prince Edward Island are strictly controlled; surveys of Indian Yellow-nosed Albatrosses Thalassarche carteri which breed on this island but not at Marion are aimed to take place at five-year increments.

Domestic cats that were brought to Marion Island in 1948 soon became feral and took to eating thousands of burrowing petrels a year until they were eradicated by 1991.  During that period cats are thought to have caused the local extinction of the Common Diving Petrel Pelecanoides urinatrix and seriously reduced the populations of the two winter-breeding procellariids, the Great-winged Petrel Pterodroma macroptera and the Grey Petrel.  The latter’s recovery compared to that of the Great-winged Petrel has been much slower, possibly because they are particularly at risk to the introduced House Mice, being a winter breeder when food for the mice is relatively sparse. 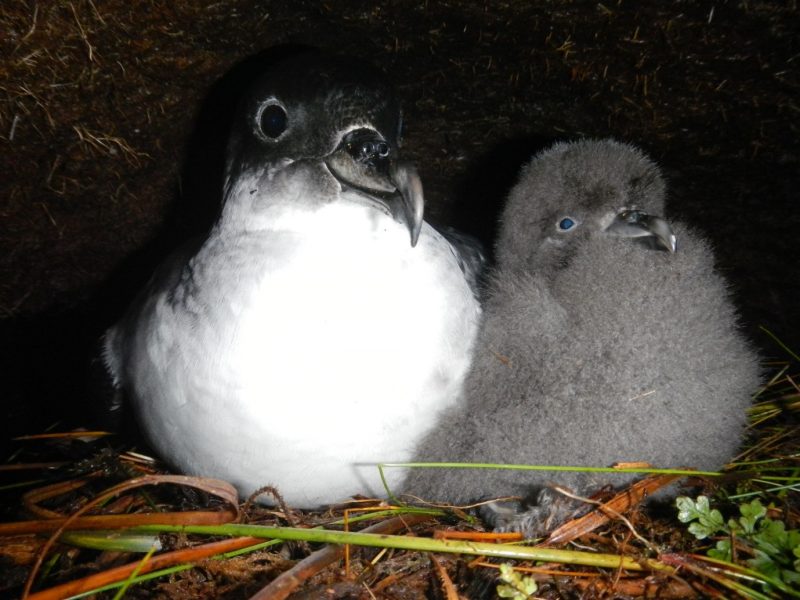 A Grey Petrel alongside its chick in their burrow on Marion Island, photograph by Ben Dilley

Grey Petrels breed on both islands of the group, and by early accounts of visits in winter, are much more common on cat- and mouse-free Prince Edward Island than on Marion Island.  At Marion Island they occupy burrows (some of which have had ice-cream buckets placed above their nests to allow easy access for monitoring), either dug by themselves or that they have taken over from White-chinned Petrels.  They also make use of shallow caverns, lava tunnels and on Prince Edward Island, under fairly exposed rock overhangs in which to breed.  Once a nest is found the chamber is also not always straightforward to access because of its location.  Their load, raucous calls are unmistakeable.   I found that searching suitable habitat using playback does work but has its limitations, as once a bird is elicited to respond to a recording, it seems to have no concept of when to stop. A quick lesson learnt is therefore to use this method sparingly, as it may attract curious Brown Skuas Catharacta antarctica to the area.

In 2004 it was decided to attempt to find at least 10 Grey Petrel nests to follow annually that were close to the island’s meteorological/research base at Transvaal Cove so as to allow regular monitoring.  Three nests were at already known sites, but finding additional nests proved to be rather difficult work and it took a few years to reach this objective with the help of mostly university field assistants who were to spend the year ashore.  I believe 18 nests were eventually located.  This dedicated effort emphasizes just how maligned this bird has been due to predation by the feral cats.

I spent nearly three months in 2000 on a legal longlining vessel fishing within the Prince Edward Islands Exclusive Economic Zone, recording interactions, mortality of and mitigation measures for seabirds.  I was particularly distraught when Grey Petrels appeared at the long-liner, as they were absolutely fearless and dived after any scraps seen in the water during line setting.  When these interactive lines were recovered, I was thankful that despite their kamikaze tactics, none was caught or killed. 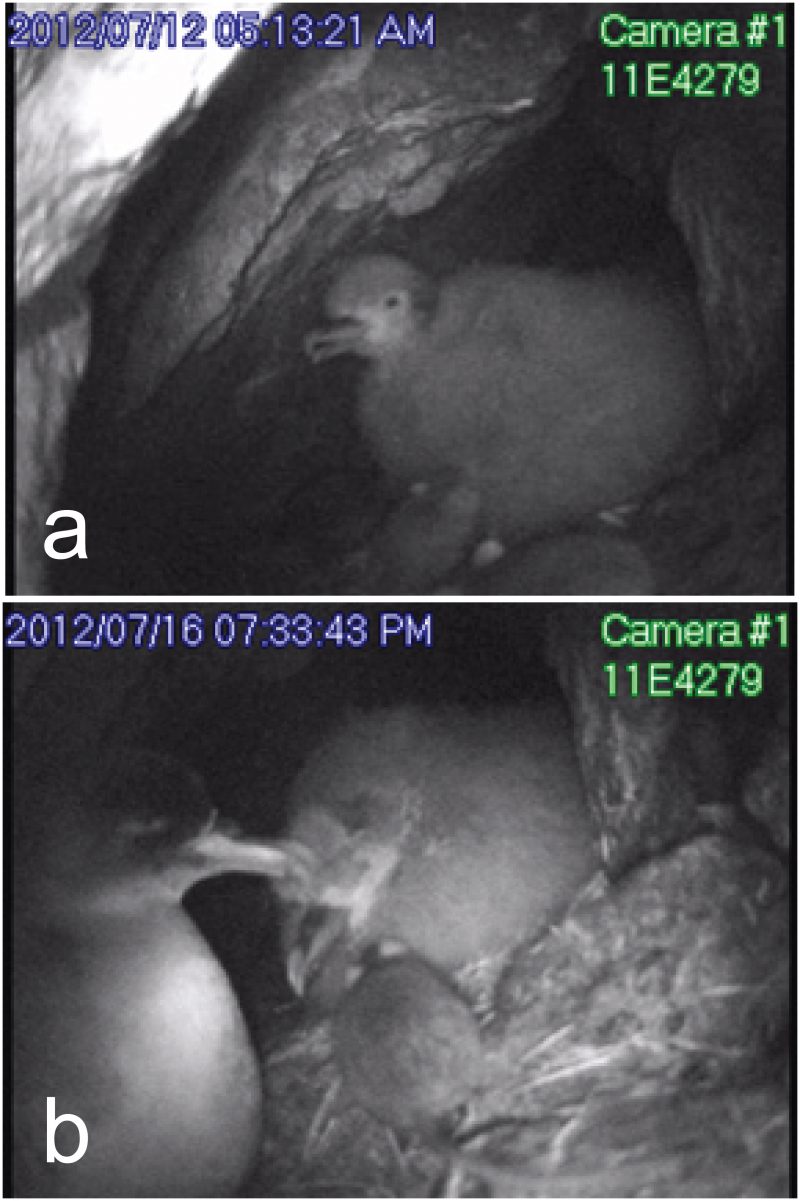 An infrared ‘burrowcam’ reveals a mouse with a Grey Petrel chick on Marion Island; photographs by Ben Dilley

Brown Skuas and Lesser Sheathbills Chionis minor would be their main natural predators, but ordinarily their burrow and crevice sites would not be accessible to them.  The latest menace facing all the seabirds at Marion Island is the introduced House Mouse.  Although mouse predation of burrowing seabirds, such as the Grey Petrel, is not as easily observed when compared to that of the surface-breeding albatrosses, studies have shown that the adverse impacts of mice on this species is a cause for great concern  Mice, with their new-found fetish for meat over vegetarian meals at Marion, are a threat that the Grey Petrel should not be facing, so soon after having had to contend with and barely survive the cats.  However, I am optimistic that the planned eradication intervention to rid Marion Island of this unwanted pest will be a success, allowing one of Marion’s rarest petrels to recover at last. 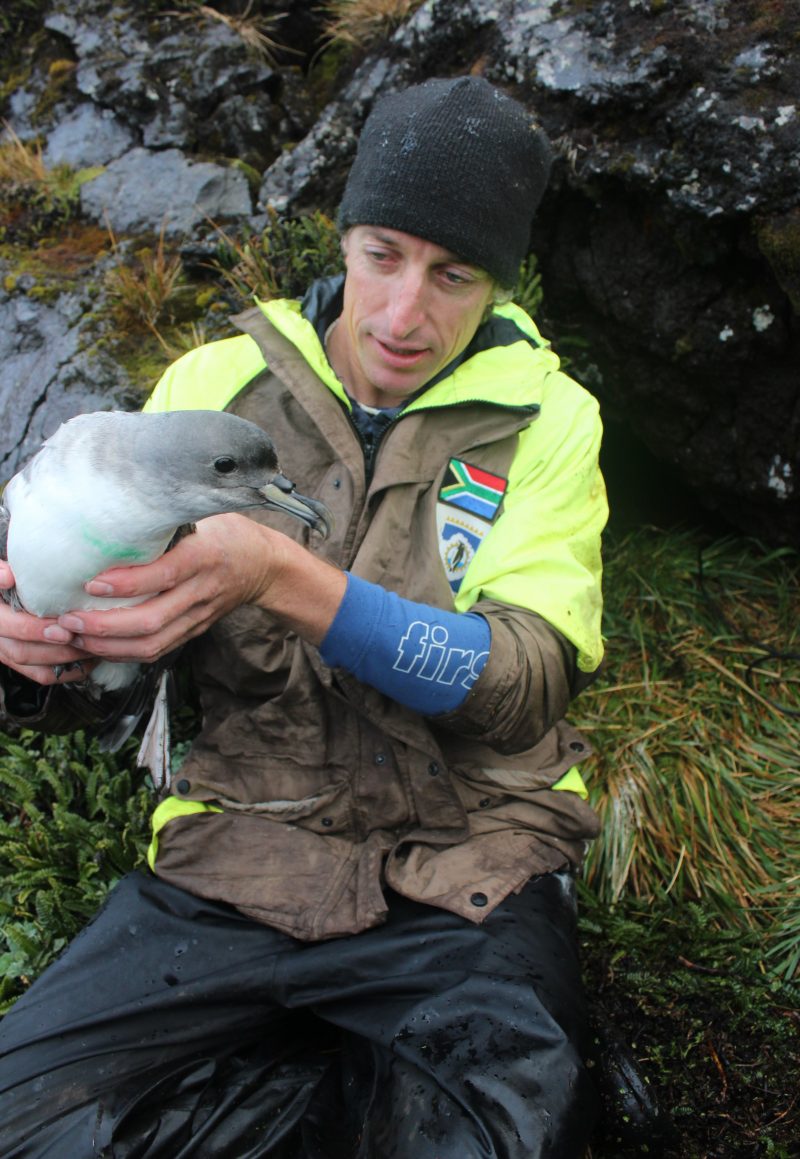 Ben Dilley holds a disgruntled Grey Petrel about to fitted with an at- sea tracking device; photograph by Bruce Dyer

I have enjoyed working for so many years at the Prince Edward Islands on its enigmatic seabirds.  The rewards emanating from the results of our efforts, has made all the ‘hard yards’ worth the effort tenfold.  The Grey Petrel was the first and one of the last species of ‘nightbirds’ with which I came into contact at this remarkable group of islands.  I certainly saved the best for the last and am very pleased that we have learnt so much about its ecology and that its numbers are slowly recovering at Marion.  I trust future generations of ‘Marionites’ will continue to carry the conservation flag to make a difference.

I wish to thank those researchers who have studied burrowing petrels at Marion Island since the 1970s.  These include Michael Brooke, John Cooper, Robert Crawford, Benjamin Dilley, Steven Fugler, Azwianewi Makhado, Peter Ryan, Michael Schramm and Ian Sinclair, along with their many research assistants too numerous to mention here by name.  Thanks also to Nico de Bruyn and Ben Dilley for the use of their photographs.