Generosity at sea. The Tygerberg Bird Club supports the Mouse-Free Marion Project with a 20-hectare sponsorship

Above Picture:  Members of the Tygerberg Bird Club gather aboard to celebrate their sponsorship

The Tygerberg Bird Club is based in South Africa’s Western Cape Province and is one of 40 bird clubs affiliated to BirdLife South Africa.  At least 32 members of this club were aboard the MSC Orchestra last month, travelling southward to South Africa’s sub-Antarctic Prince Edward Islands on the “Flock to Marion 2022” voyage.  Enthused by onboard lectures on albatross conservation by Peter Harrison MBE and by the Mouse-Free Marion (MFM) Project Manager, Anton Wolfaardt, they decided that their club would donate to the MFM Project by sponsoring 20 hectares with a R20 000 donation. 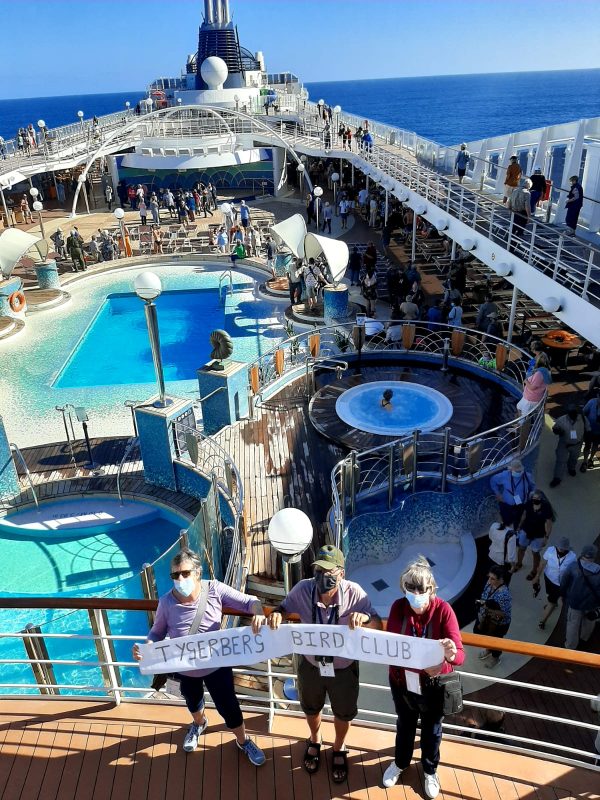 Tygerberg Bird Club’s Brian Vanderwalt describes the club’s contribution “we organised a get together of our members on board and proposed the idea to them.  Everybody present agreed wholeheartedly with this idea and we, therefore, went ahead with a pledge of R20 000.”

BirdLife South Africa’s CEO, Mark Anderson, has written to the club saying “[your] VERY generous donation has brightened my day.  Thank you very, very much.”  A feeling echoed by the whole MFM Project Team!

To date, 20 of the 40 BirdLife South Africa-affiliated bird clubs, including the Tygerberg Bird Club, have contributed a total of R140 000 to the MFM “Sponsor a Hectare” campaign.  Sponsorships from the remaining 20 clubs will be gratefully received!

With thanks to Brigid Crewe, Chair, Tygerberg Bird Club.