Heading south. Two new MFM team members will conduct research on House Mice and their effects on Marion Island for a year

The Mouse-Free Marion Project, in collaboration with the Department of Plant And Soil Sciences at the University of Pretoria, is shortly about to commence a research and baseline monitoring programme on the island, deemed essential for the mouse eradication effort currently planned for 2024.  Following on from a required COVID-19 quarantine period in a Cape Town hotel, a five-person field team sailed south on 17 April as part of Marion Island’s annual relief aboard South Africa’s Antarctic research and supply vessel, the S.A. Agulhas II.  The team is being led by Anton Wolfaardt, MFM Project Manager and Keith Springer, MFM’s experienced Operations Manager (who flew across from his home in New Zealand for the trip), supported by Dr Luis Pertierra from the Department of Plant and Soil Sciences.  Two newly appointed MFM field researchers, Vhuawelo Simba and Elsa van Ginkel, will stay on the island as members of the 79th Marion Island Overwintering Team for 13 months, returning to South Africa in May 2023.

Elsa and Vhuawelo will undertake monitoring of mainly plants and invertebrates towards establishing baseline datasets.  These will establish the ecological condition of the island ecosystem in the presence of mice and allow future surveys to assess the ecological outcomes of the eradication operation.  The two field researchers will also be involved with bait trials and pre-baiting mouse sampling. 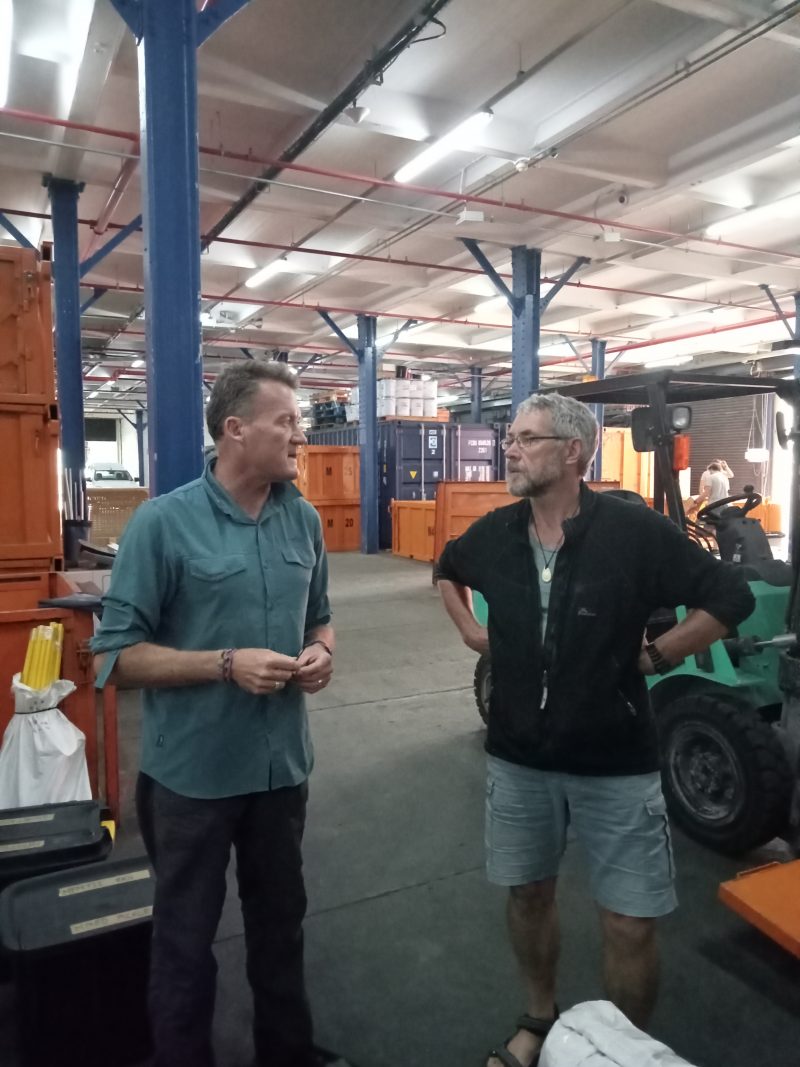 Elsa and Vhuawelo told MFM News when interviewed in the Department of Forestry, Fisheries and the Environment (DFFE) packing store prior to entering quarantine that they are both excited and honoured to be part of the project and are looking forward to their island stay.  Elsa has already spent a year on Marion as a member of the island’s 75th Overwintering Team in 2018/19 as a botanist on a project that modelled wind patterns and their ecological impacts.  She writes fondly of her previous year “I enjoyed climbing every peak I could find between all the field work.  The ice caves were definitely a high for me.  I remember I visited both Mascarin Peak [the island’s highest point] and the ice caves in one day and the skies were clear the entire time.  You could see offshore Boot Rock from Mascarin!”  So the weather is not always that bad on Marion – and surely her multiple field excursions as a university student to South Africa’s Drakensberg, Magaliesberg and Wolkberg mountains were good practice for venturing into Marion’s hilly interior.

Elsa adds that she grew up on a farm in South Africa’s Limpopo Province, where her love for nature found its origin.  “The savanna veld is where I learned to bird, to hike and to observe the natural environment.”  Her tertiary studies took place at the University of Pretoria with a BSc in Ecology, followed by Honours in Plant Science cum laude, after which she went to Marion.  This experience led her to working towards a Master’s degree at the University of Pretoria on plant-invertebrate interactions on Marion Island.  She concludes “I think the best part of Marion Island is as a field researcher you get the opportunity to experience the full life cycles of its sub-Antarctic fauna and flora.   You are out there with them, in the field, every day.  You experience their growth, their suffering and their prosperity.  It will be an honour to be part of a project that will contribute to the restoration of a sub-Antarctic island”. 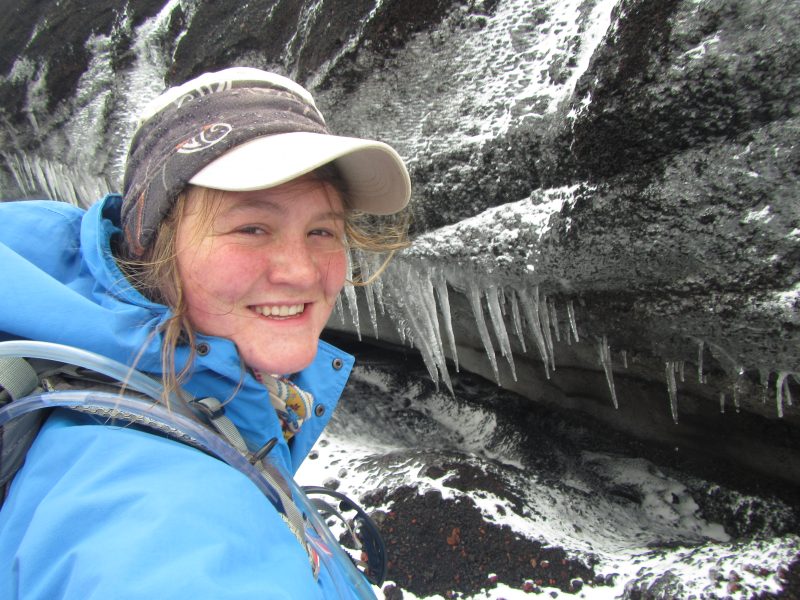 “Honestly one of the best days of my life!” Elsa at the entrance to Marion’s ice cave in March 2019

Vhuawelo is also from the north of the country: “I was born in a small village called Tshaulu Masiwane in Limpopo, the northernmost province of South Africa, where I also did my schooling”.  She holds a BSc degree in Biochemistry and Biology from the University of Venda and a BSc Honours in Biodiversity and Conservation Biology from the University of the Western Cape.  She recently obtained her Masters degree from the University of Mpumalanga, researching the influence of subtropical fruit plantations on flightless arthropods.  Prior to her honours studies Vhuawelo worked for the South African National Biodiversity Institute (SANBI) near Cape Town, including at its National Botanical Gardens in Pretoria.

Vhuawelo continues “experience and travel are an education in themselves.  When I saw the advert for this position I felt it was the most suitable opportunity to provide both.  Introduced House Mice pose a serious threat to Marion Island’s native biota and I am happy to be part of a big project like this that will contribute towards the conservation and restoration of the island.  Besides gaining scientific experience, I am going to spend a whole year surrounded by magnificent landscapes and in different weather conditions from those I have been exposed to in South Africa, and I am looking forward to making my first snowman!  I am also going to be on a ship at sea and ride a helicopter for the first time.”

She is also looking forward to working hard and collecting enough data to lay a stable foundation for the eradication of mice.  She ends “I hope that this expedition will lay the foundation for my future studies as I intend to pursue a PhD.” 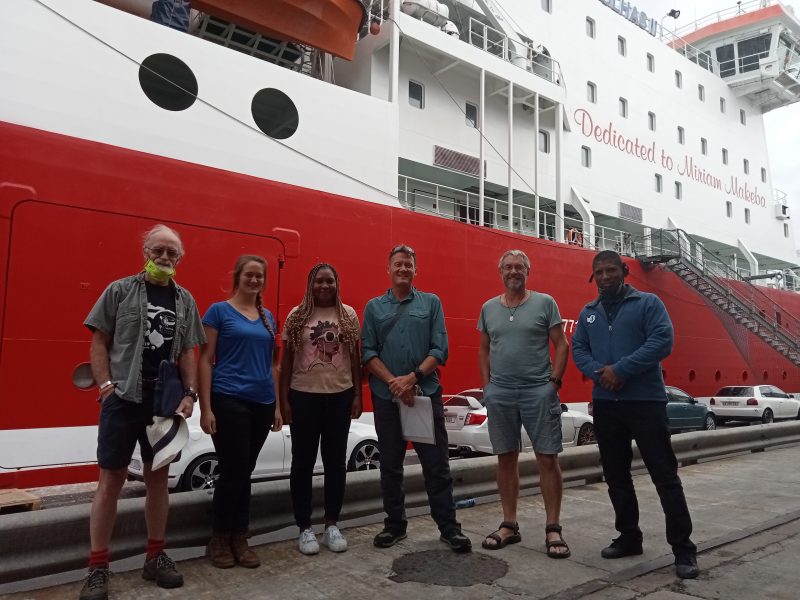 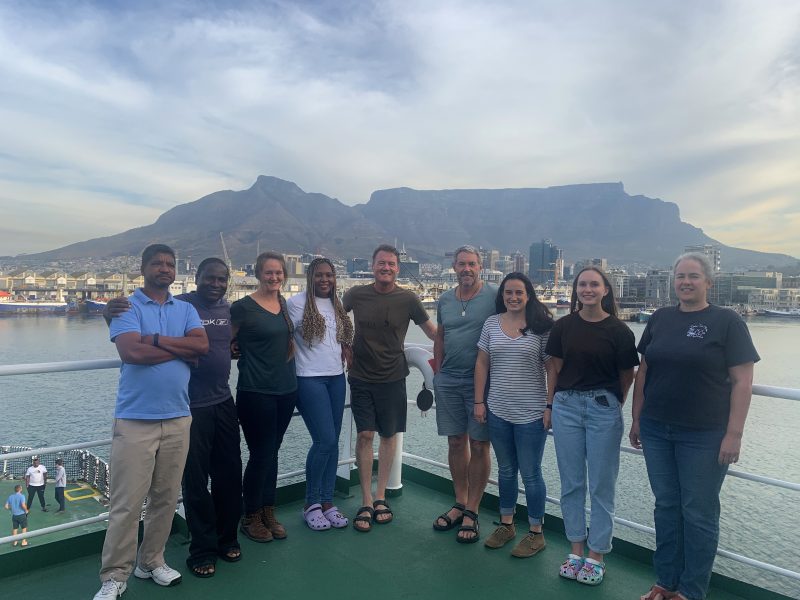 The year’s field work for the island research project formally entitled “Longitudinal monitoring of terrestrial diversity to assess the effects of mouse eradication on Marion Island, and bait and mouse trials to inform further planning for the project” will be undertaken as a collaboration between scientists who have been extensively involved in ecological research at Marion Island.  These include Principal Investigator, Professor Michelle Greve (Department of Plant and Soil Sciences, University of Pretoria), represented during the relief by her colleague Dr Luis Pertierra. along with Professors Peter Le Roux (University of Pretoria), Steven Chown (Monash University, Australia) and Bettine van Vuuren (University of Johannesburg) and Dr Charlene Janion-Scheepers (University of Cape Town), as well as Anton and Keith.  The monitoring work will focus on the island’s plants and invertebrates that, as well as the seabirds, are deleteriously affected by the invasive mice.  Wieteke Holthuijzen (University of Tennessee, USA), who has studied invertebrates and House Mice on Midway Atoll in the North Pacific for her MSc has come aboard as a collaborator.  She seeks to understand the position of invasive mice in the trophic levels of island ecosystems.  The project will link closely with ongoing research on the avifauna of the island that is being conducted by Dr Maëlle Connan (Nelson Mandela University), Dr Azwianewi Makhado (DFFE) and Professor Peter Ryan (FitzPatrick Institute, University of Cape Town).

The Mouse-Free Marion Project is a registered non-profit company (No. 2020/922433/08) in South Africa, established to eradicate the invasive albatross-killing mice on Marion Island in the Southern Ocean. The project was initiated by BirdLife South Africa and the South African Department of Forestry, Fisheries and the Environment.  Upon successful completion, the project will restore the critical breeding habitat of over two million seabirds, many globally threatened, and improve the island’s resilience to a warming climate.  For more jinformation or to support the project please visit mousefreemarion.org