How are the bait-loading sites for the Mouse-Free Marion Project being chosen?

Above Picture:  Hard and flat with plenty of space.  This little-visited inland locality, near Middelman on Marion Island, has been identified as a suitable bait-loading site.  Photograph by Anton Wolfaardt

Planning the eradication of House Mice on Marion Island by the aerial distribution of rodenticide bait, over what will be by far the largest area in a single operation, is not a simple task.  And that is an understatement!

Project supporters who have been following posts on this website will be interested to read about some of the myriad of planning details required.  One important requirement for a successful eradication is choosing suitable bait-loading (and refuelling) sites.  To maximise bait-spreading time during the infrequently expected good-weather days, sites to stockpile the pods containing bagged bait and sufficient fuel drums (known as “bait depots”) will need to be established in advance around Marion Island’s nearly 300 km2.

Operations Manager Keith Springer, accompanied by Project Manager Anton Wolfaardt, took part in the annual relief voyage to Marion during May this year (click here).  Armed with a map to help identify potentially desirable locations, they had the task of reconnoitring sites by helicopter to confirm whether what looked suitable on the map proved to be suitable on the ground.  This followed a similar exercise during a 2018 visit, which was unfortunately unable to be completed in the time available.

Mouse-Free Marion News reached out to Keith Springer to learn more about this essential task.

MFM News:  What are the physical requirements for a site? 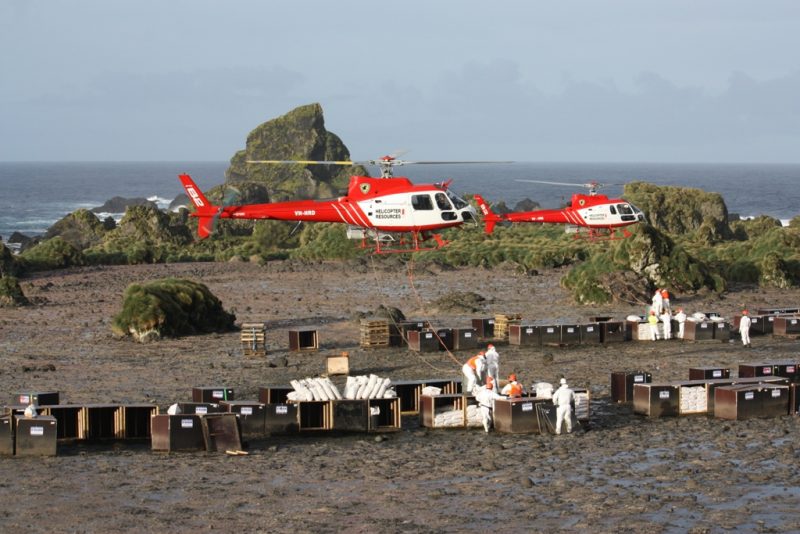 Helicopters load bait simultaneously from two lines of bait pods at Hurd Point on Macquarie Island in 2011; the bait depot was set up in a seasonally empty Royal Penguin colony. Photograph by Keith Springer

KS:  Primarily, we need reasonably large, level, even sites on firm ground with little in the way of adjacent hilly topography.  We also require a site that is oriented to the prevailing wind and has suitable approaches, with no immediately rising ground and ideally a downward slope in the upwind direction.  This is so a helicopter taking off with a full load has falling ground beneath it, which can be used to gain speed if necessary.  The ground at the loading site also needs to be even, too many large rocks or large clumps of vegetation will render it unsuitable.  The bait pods need to sit fairly flat, as once they are in position, they then form the platform that the loading team members stand on to fill the bait bucket.  If the ground is too uneven due to rocks, for example, the pods won’t sit flat or will be at different heights or angles to neighbouring pods, and they then will be too unstable to use as a platform.

We also need sufficient spatial area for all the activities and supporting equipment that a bait depot will require.  For example, we need room for many drums of Jet A1 helicopter fuel and a refuelling site.  These need to be in close proximity to the bait-loading lines because every time a helicopter lands to refuel, the GIS Technician needs to go over to it to download the most recent flight lines from its on-board GPS unit.  However, it can’t be so close to the bait-loading line that a helicopter coming in for a fresh load of bait would impact the refuelling helicopter with its rotor wash, so these two components need to be around 30-50 metres apart. 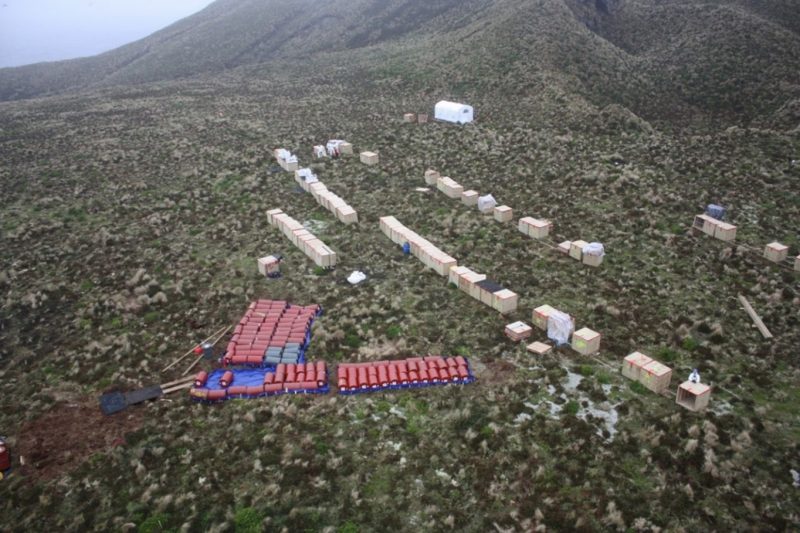 Aerial view of a bait-loading/refuelling site on Antipodes Island in 2016. Photograph by Keith Springer

The above bait depot on Antipodes Island during the 2016 mouse eradication shows the space required to support an aerial-baiting operation.  Suitable sites are often rare, and in this case it was very close to several nests occupied by chicks of the globally Endangered Antipodean Albatross (circled), but there was no other option with the requisite characteristics available in the vicinity.  The photo shows rows of bait pods (some already used) aligned parallel to the prevailing wind, a structure that provided a workspace for the GIS Technician, shelter for the loading team in adverse weather conditions, and space to store PPE and load-site equipment.

A bait depot at Green Gorge on Macquarie Island in 2011. One helicopter is refuelling (centre) while another waits for a load of bait (right). Photograph by Keith Springer

The scene at Green Gorge on Macquarie Island in 2011 above shows a similar layout to that at Antipodes Island.  At this depot site, all the requisite characteristics were met except for the firmness of the surface.  To prevent the bait pods depressing the boggy ground, sheets of fibreglass-reinforced plastic (FRP) were first laid down to support their weight.  The site supported the baiting operation for four helicopters.

MFM News:  Will any of the nine field huts on Marion Island be suitable as bait-loading sites? 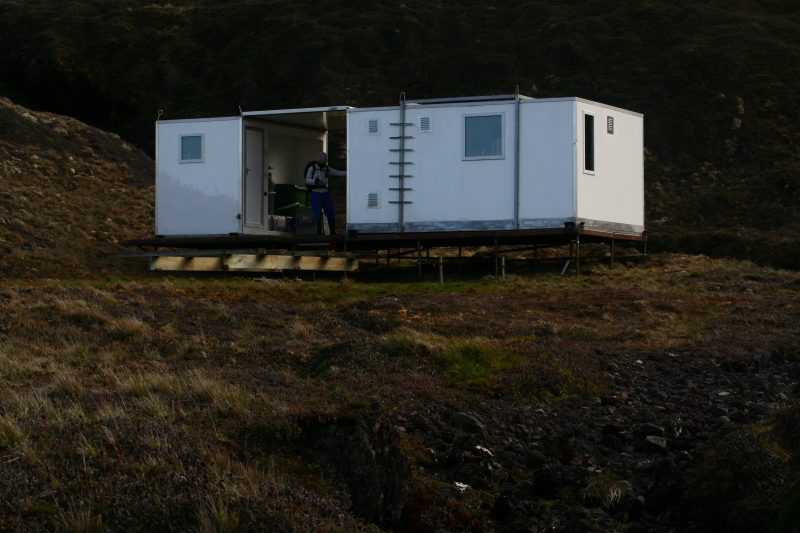 The field hut at Repetto’s Hill, too boggy and too close to sloping terrain to be a suitable bait-loading site. Photograph by Chris Oosthuizen

KS:  The existing huts aren’t suitable because none of them has the requisite characteristics for a load site.  They do all have an approach path for a helicopter, but only to a single landing point.  The hut sites are either too boggy (which is no good for placing tonnes of bait pods because they will depress the ground allowing rising water to wet them) or they are situated adjacent to uneven terrain, which reduces the space for helicopters to manoeuvre and exacerbates turbulence from localised wind conditions.  Additionally, they don’t have the amount of suitable space around them that will be needed to set up all the facets that make up an operational loading site.

MFM News:  Is the meteorological/research base suitable to operate as a loading site? 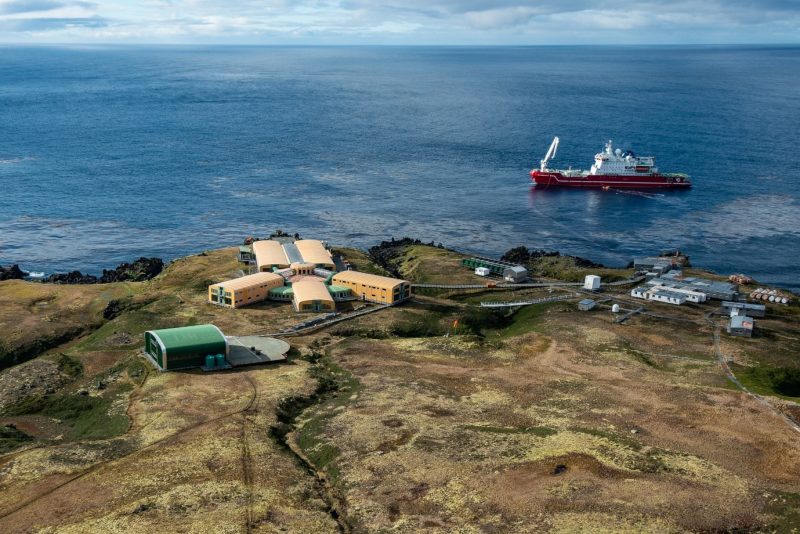 The new (left) and old (right) bases with South Africa’s research and supply vessel, the S.A. Agulhas II, off Transvaal Cove, offloading fuel during the 2022 relief voyage. The green building is a helicopter hangar with a landing pad attached. Photograph by Anton Wolfaardt

KS:  Most of the terrain around the base is boggy, and thus is not really suitable, even though there is a fair bit of flat ground.  Not only is boggy ground unsuitable for supporting the weight of bait pods and fuel drums, but it is also a lot harder to work in and impacts the ground unnecessarily through the concentrated foot traffic that occurs at a loading site.  With our preferred depot sites being on solid ground or gravel, there will be very little ground disturbance by foot traffic.  The nearest suitable site to the base that has been identified is some way inland on the flat ground adjacent to the north slope of Junior’s Kop.

MFM News:  How many bait-loading sites will be required?

KS:  For the purposes of aerial baiting, the island will be divided into several baiting blocks.  This will enable us to focus on sequential baiting in each block.  We then need to decide how many bait depots will be needed to support the flying operations in each block, and where they should be in the block.  A helicopter will leave the site with about 650-800 kg of bait per load, depending on the model of helicopter we use.  So, we need to work out how much bait is required to complete two applications in each block, and then where the bait depots should ideally be placed to support the aerial baiting work, given that every time a helicopter runs out of bait, there is an unproductive ferry flight to return to the nearest depot for more.  We also need to work out the flying time required to deliver that bait to each block, and from that calculate the number of drums of helicopter fuel to place at each bait depot.  That’s a lot of background, but the answer to the question is that we’ll probably have four baiting blocks, maybe five, and probably up to three depots per block.  So, most likely we would be looking at around 8-14 bait / fuel depots for the whole island.  Some sites will be located near block boundaries, meaning that they will be able to support baiting in parts of two adjacent blocks.

There is still time to finalize the number required and localities of the bait depots, and this will be further progressed with the input of the selected helicopter provider, once determined.

The experience of Keith Springer gained on eradications elsewhere and Anton Wolfaardt’s intimate knowledge gained from spending a year living on Marion Island will ensure that the best bait depots are identified and utilized, thereby minimising the associated risks and maximising the chances of overall success of the project.