Above picture: Carol Jacobs receives her Owl Award from Philip Calinikos, Chairperson of BirdLife South Africa’s Board of Directors

On 20 September, BirdLife South Africa’s CEO, Mark Anderson hosted the NGO’s Owl Awards ceremony at its Johannesburg headquarters, Isdell House.  Owl Awards are made annually to deserving recipients who have made valuable contributions to the conservation of South Africa’s birds and their habitats.  One of this year’s 12 awards went to Carol Jacobs, a member of the Mouse-Free Marion Project Management Committee, on which she represents the South African Department of Forestry, Fisheries and the Environment. 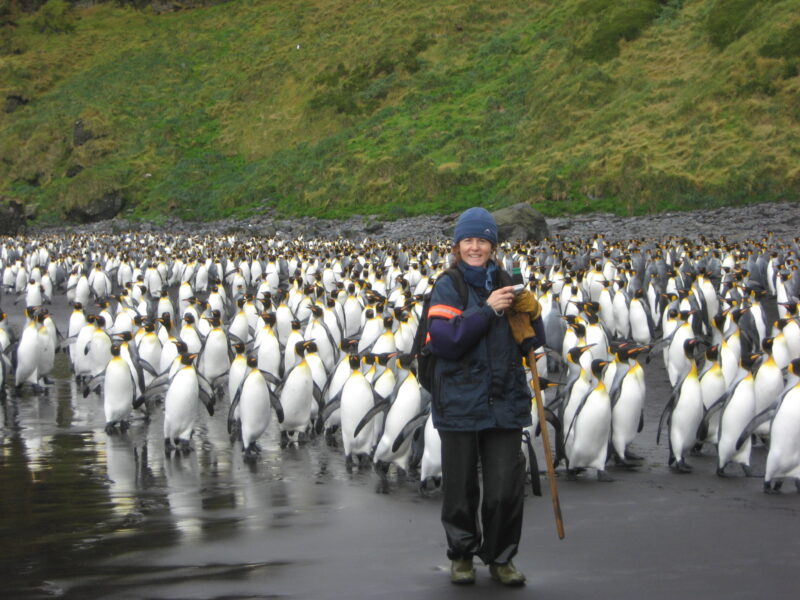 Carol Jacobs, along with inquisitive King Penguins, on the beach at Ship’s Cove, Marion Island in 2008 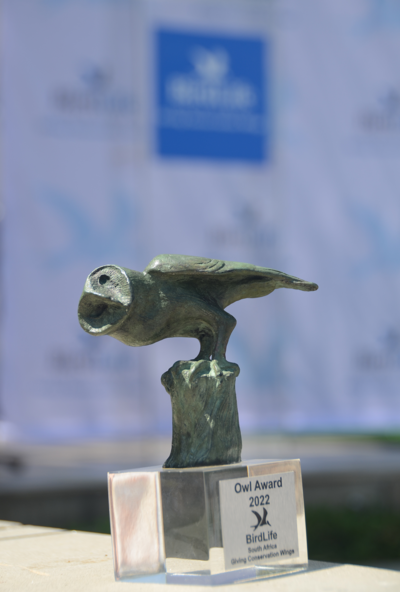 “Carol Jacobs is a long-time official of the South African Department of Forestry, Fisheries and the Environment (and its precursors), currently within DFFE’s Environmental Programmes.

For three decades or more she has been involved with environmental management of the Prince Edward Islands, including by being a member of DFFE’s Prince Edward Islands Advisory Committee (PEIAC).  She has been DFFE’s liaison person with the Environmental Control Officers who spend a year on the island, helping to direct their field work and preparing their reports for the Advisory Committee.

A significant part of this work has been her input to the eradication of alien plants and invertebrates on the island.  On a number of annual research visits to Marion Island (and to Gough Island) she has been the department’s senior representative.  On several of these visits, she has conducted environmental inspections of Marion Island, including week-long hikes to assess the environmental ‘footprints’ of the island’s field huts.

Carol has also played a particularly important role in building the focus on biosecurity within the South African National Antarctic Programme (SANAP), and has co-ordinated the Department’s efforts to improve its capacity and practices to address this risk, especially in relation to reducing the chances of new species of alien rodents, invertebrates and plants reaching Marion Island.

In all her environmental work related to SANAP she is widely regarded for her attention to detail, rigour of analysis and firm stance on principles.  Her work-ethic is exceptional.

She is passionate and committed to see House Mice eradicated from Marion Island.  She further brings a firm adherence to process and ethical practices, and this has been of particular value for management of the Mouse-Free Marion Project.  With her island experience, Carol is a valued team member of the Mouse-Free Marion Project Management Committee (and several of its specialist committees), acting as a highly important liaison person for project partner DFFE.”

Mouse-Free Marion Project Manager, Dr Anton Wolfaardt, writes on the occasion of the award: “We are very fortunate to have Carol as part of the MFM team.  Her depth of knowledge about the island and its management, and her passion and commitment to eradicate invasive mice from Marion Island have been instrumental in achieving the progress we have made to date.”

In response, Carol writes to MFM News: “My sincere thanks to BirdLife South Africa for my Owl Award and to Mark and Anton for their kind words.  I am so pleased to be part of the dedicated DFFE and BLSA Mouse-Free Marion team on this remarkable project. If our efforts are successful and Marion Island’s seabirds can once again breed in peace – now that would be something truly worthwhile!”

Watch a 45-minute video about this year’s award winners here; Carol’s citation is read out by Mark Anderson, starting at 13m 20s.

With thanks to Mark Anderson and Andy Wassung, BirdLife South Africa.