Photo above – The S.A. Agulhas II departs from Cape Town on a journey south, photograph by Sydney Cullis

On 9 April, South Africa’s Antarctic research and supply ship, the S.A. Agulhas II left Cape Town to undertake its annual relief voyage to Marion Island, with Dr Anton Wolfaardt, the Mouse-Free Marion Project Manager, aboard. Anton is participating in the 5-week voyage to gain a better understanding of the current logistical and management attributes and dynamics of the island and its infrastructure, as well as of the S.A Agulhas II, itself, so that these can be incorporated into the planning for the mouse eradication project, scheduled for the austral winter of 2023.

Anton’s journey as a seabird and marine conservation scientist and practitioner started at Marion Island more than 25 years ago. From 1994-1995, he was a member of the 51st Marion Island overwintering team, in which capacity he worked as a seabird field researcher. Anton reports that the year spent on Marion Island was a profound experience that inspired him to pursue other opportunities in the field of seabird and island conservation, and which has shaped his career ever since.

Anton subsequently spent five years on Dassen Island, off the west coast of South Africa, working amongst thousands of African Penguins and other seabirds, initially as a contract researcher collecting data towards, his PhD and later as the conservation manager of the island. After leaving Dassen Island, Anton worked as a Regional Ecologist for CapeNature, the conservation authority for the Western Cape Province of South Africa.

In 2008, Anton headed to the Falkland Islands to take up the newly created position of ACAP (Agreement on the Conservation of Albatross and Petrels) Co-ordinator for the United Kingdom’s Overseas Territories in the South Atlantic, including the Falkland Islands, South Georgia and the South Sandwich Islands, Tristan da Cunha (including Gough Island) and the UK’s interests in Antarctica. 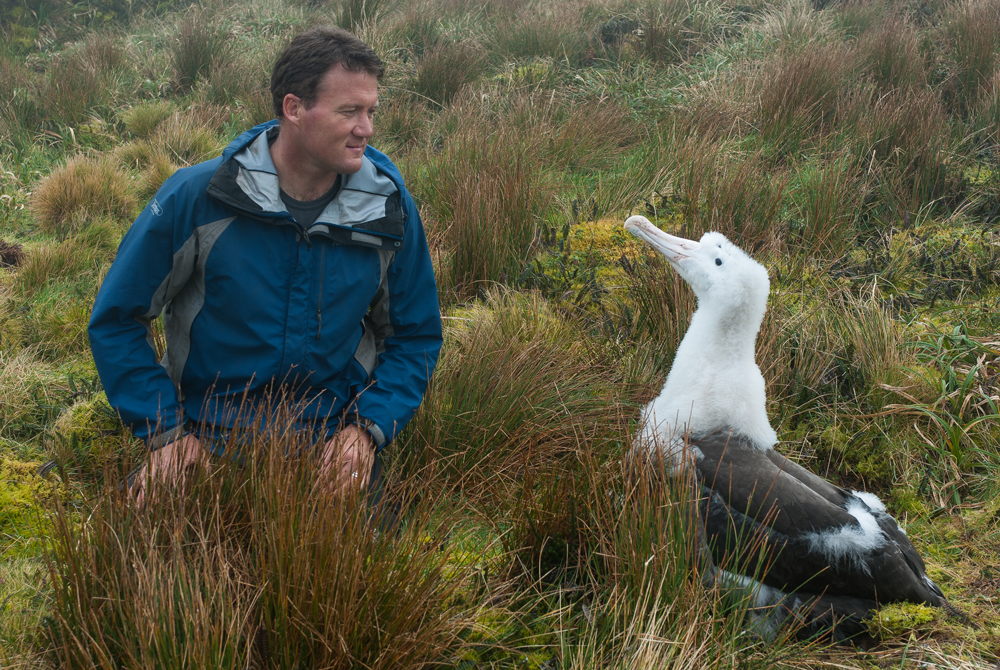 Anton pauses with a Tristan Albatross chick during a survey for mouse attacks on Gough Island in 2009, photograph by Norman Glass

Anton returned to South Africa from the Falklands in late 2013 and continued to serve as the Co-convenor of ACAP’s Seabird Bycatch Working Group until this year.  He also worked as an environmental consultant focusing on seabird and marine conservation issues, as well as a lecturer and guide on expedition ships visiting the Antarctic and sub-Antarctic regions. He says that he is delighted and honoured to have been appointed as the Mouse-Free Marion Project Manager. He is greatly looking forward to visiting Marion Island again after all these years, and to being part of this important conservation endeavour to help restore the island, reclaiming it for the globally important seabirds and other wildlife that call it home.