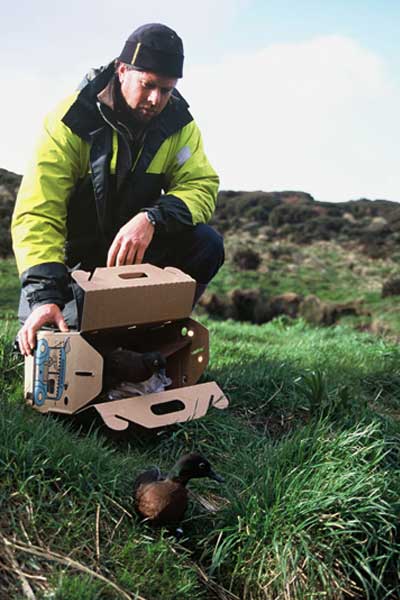 Pete McClelland releases a Campbell Teal back on the island

Norway Rats became established on Campbell Island soon after it was discovered in 1810.  To add to the problem domestic cats were introduced shortly afterwards, which formed a feral population.  This meant that by the time the first scientists visited the island the avifauna was already severely depleted, with the only native land bird found being the Campbell Island Pipit Anthus novaeseelandiae aucklandicus.  Even this was only an occasional visitor to the main island from several small rat-free islands offshore, since any individuals that made it to the main island were soon preyed upon.  In the 1940s a single small flightless Campbell Teal Anas nesiotis was found on the coast but it was not for another 30 years that it was discovered that there was a small population, possibly as few as 30 birds, on one of the offshore islands – 26-ha Dent.  A captive population was established in New Zealand in the early 1990s to protect the duck, but the ultimate aim was to return it to Campbell Island.

At that time, the thought of eradicating rats from an island of over 11 000 ha and more than 700 km from the mainland, let alone one with cliffs over 250 m high and in the area known as the Furious Fifties for its strong and persistent winds (Campbell is at 52ºS), was inconceivable to most people.  However, as the techniques for aerial baiting were refined on increasingly larger and more challenging islands New Zealand’s Department of Conservation decided to attempt Campbell Island.

During the planning phase it was found that the cats had died out, which – with the domestic sheep that had become feral having been recently eradicated – simplified the restoration of the island.  To make the operation logistically feasible, i.e. using a manageable amount of bait, and keeping the time required to spread it within what could reasonably be expected on Campbell – where it rains on over 300 days a year – it was decided that rather than the standard two applications of bait at 8 and 4 kg/ha, Campbell would be treated with a single drop of 6 kg/ha, but with a 50% overlap to minimise the risk of any gaps.  Following trials that confirmed that this would expose every rat to a lethal dose of bait and that the proposed 10-mm/2-g Pestoff cereal pellets manufactured in New Zealand were the most appropriate, the operational planning got underway in 1999. 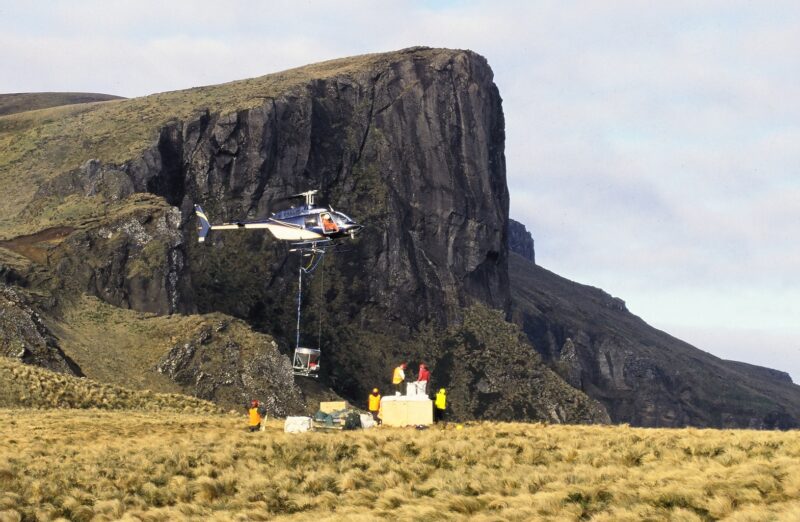 Even with the change in baiting strategy the project needed 120 tonnes of bait, far more than had ever been used for an island operation before.  Given the poor weather expected during the treatment period – which had to be during winter to avoid the thousands of albatrosses which breed on the island, as well as fitting in with when the rats’ natural food was at its lowest – it was decided to use three helicopters to spread the bait.  Bell Jet Ranger helicopters were selected, as they were the main model used for agricultural work at that time, and the baiting pilots were familiar with them.  In addition, an AS350 Squirrel helicopter was used to ferry the bait from the storage site at the base (the team used an abandoned meteorological station for accommodation) to the loading sites around the island.  A second Squirrel was used to help offload the bait from the ship to shore in order to get this task completed as quickly as possible.  This proved a good decision as unloading was completed in one day, after which the weather deteriorated and would have prohibited unloading for over a week.  The helicopters all flew a trans-oceanic route of nearly 800 km (each way) from South Island, New Zealand via a fuel depot on Enderby Island in the Auckland Island group.

Due to the size and irregular shape of the island it was divided into four sections across its narrowest points.  Each of these was treated in turn with two loading sites set up in the area so that the helicopters could reload at the site closest to where they were working.  While two machines flew the main transects over the top of the island the third machine baited the cliffs.  Although cliffs are now baited using a specially designed deflector which fits into the bait-spreading bucket and guides all the bait out to one side, this had not been developed when Campbell was done.  To minimise bait going into the sea a rubber curtain was hung off half of the bucket so that when bait hit it, it simply dropped straight down. 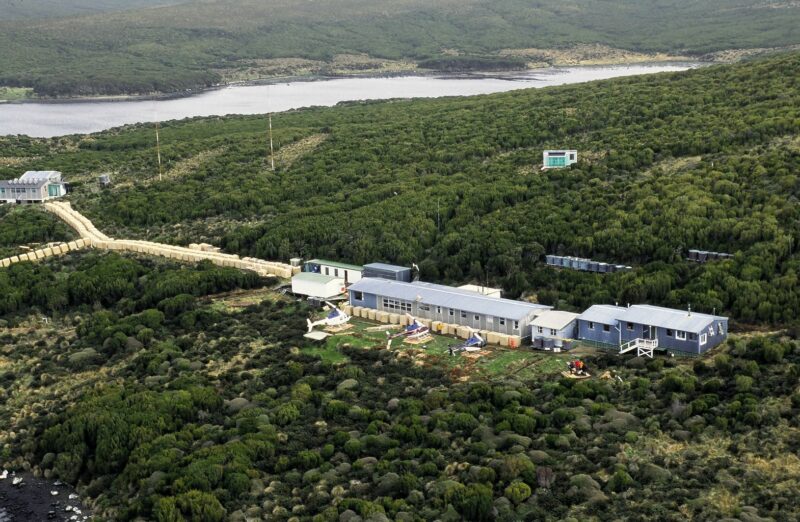 The old Beeman weather station on Campbell Island that was the hub of the Rat Eradication Project. Three helicopters parked in front of a row of bait pods; photograph by Pete Tyree

Due to the soft peat soils and the use of multiple loading sites it was not possible to use a mechanical loading system and all the bait – in 30-kg bags – was loading into the buckets by hand.  With the two loading sites needed to speed up the turn-around time of the helicopters, i.e. not to have helicopters waiting to be loaded, a team of 14 plus the four pilots was used for the operation.  Each loading team consisted of five people adequate for the relatively small bucket loads (350 kg) used.  The crew included all the required skills both to undertake the baiting operation e.g. a GIS technician and experienced baiting advisors, and to keep the old weather station in Beeman Cove rumning, which had been abandoned several years earlier, an engineer, electrician and a cook.

Bait storage was another issue, as there were no facilities on the island to store the bait and it had to be kept dry for up to three months.  After exploring a wide range of options, it was decided that the best system was using custom-made “pods” made out of plywood.  These each held 25 bags totalling 750 kg of bait, with 160 pods required for the operation.  The design of the pods enabled them to be opened from any side.  This meant they were also ideal to be used as a loading platform, with four put together and the 10-12 bags needed for each bucket load placed on top, from where the loading team could easily pour the bait into the bucket.  The idea of the pod worked so well that they have since been used for projects around the world including on Macquarie Island (Australia), Antipodes (New Zealand ), in the Aleutians (USA) and most recently on Gough Island (UK).  This is an example of how the ideas and information learnt from one project are shared and then modified to fit the individual situation for future projects.

Having a single bait application meant that it had to be done accurately, but the GPS systems available in 2001 were not as accurate as they are now, so a ground base-station or differential unit was required.  This had to be set up on a high peak every day, so it could receive signals from the satellites and then the helicopters could obtain their locations from the base unit.  This worked very well and, along with the skilled and experienced pilots who were used, the operation was completed in just one month instead of the three-month window that had been allowed for the weather.  After two years had elapsed with no signs of rats ashore, Campbell Island was officially declared rat free – a great achievement and at the time the largest island anywhere in the world for which a rodent eradication had ever been attempted.

A refuge for the Campbell Teal. Steep-sided Dent Island offshore from Campbell Island

Following the removal of the rats Campbell Teal were reintroduced to the island in 2004,when ironically, they were greeted by a lone male that must have swum the five kilometres from Dent Island.  The pipits, which had never managed to breed on the main island while the rats were there, soon re-established themselves and are now abundant.  A major bonus was the discovery of Subantarctic Snipe Coenocorypha aucklandica perseverance on another of the outlying islands – 19-ha Jacquemart.  While discussions were underway as to whether it was better to try to establish a captive population, to transfer a small number of birds directly to Campbell, or to just leave that population alone, the snipe flew the one kilometre to the main island and soon established themselves there.  In addition, the smaller seabirds, such as storm petrels which had been extirpated by the cats and rats, soon started to re-establish.  The rustlings heard in the vegetation are now teal and snipe rather than rats.

In addition to the benefits from the recovery of birds, insects and plants, the Campbell Island Rat Eradication Project proved that large and isolated islands could be successfully cleared of rodents.  This precedent influenced other countries undertaking similar projects on their respective islands, including Macquarie and Lord Howe Islands (Australia), Hawadax (USA, formally Rat Island) in the Aleutians, South Georgia and Gough (UK).  This steadily accumulating knowledge is helping guide the Mouse-Free Marion Project in its aim of eradicating that island’s albatross-killing House Mice.