Above picture: Guests of the SANParks Honorary Rangers gather with their driver and a birding expert for a game drive in Kruger National Park in 2018

Back in the very early days of the Mouse-Free Marion Project that aims to eradicate the island’s seabird-killing House Mice, I proposed to the BirdLife South Africa staff members then managing the project that one of the ways that funds could be raised was by a “Sponsor a Hectare” campaign, to be aimed mainly at people within South Africa.  I took the idea from the successful crowd-funding effort made by the Million Dollar Mouse project, that in 2016 eradicated introduced House Mice on New Zealand’s sub-Antarctic Antipodes Island. Crossing off the mice as Million Dollar Mouse fundraising proceeded

One of the earliest sponsorships received, made in August 2018, was for 95 ha.  At R 1000/ha this was a large and most welcome sum at the time.  Simon Ridge, Chairperson of the West Rand Region, SANParks Honorary Rangers (SHR; the official volunteer organization of South African National Parks), has replied to MFM News’ recent query explaining how this generous sponsorship came about.

“The West Rand Region of SANParks Honorary Rangers has run annual birding events in the Kruger National Park for nearly 25 years (our next event in February 2023 will be our 25th occasion).  These camps have had up to 750 guests spread over up to 22 camps in the park over five weekends.  The model is to have two honorary rangers as hosts, and birding experts to assist and educate our guests about birds.  When necessary, BirdLife South Africa, with whom we have had a long-standing relationship which we value very highly, has recommended experts for our weekends.

For several years we reciprocated this gesture by managing a raffle on behalf of BirdLife South Africa, which often organised the prizes.  We then donated the entire proceeds to this environmental NGO for its conservation projects.  At that time, we were less focused on SANParks per se and we were able to support conservation efforts in general under the banner of the SHR, by supplementing the raffle proceeds.  This is no longer the case.

Of course, many of our members are themselves keen birders, many of which are also  BirdLife South Africa members, and some can be designated ‘experts’.  One of our Regional Management Committee members, the late Tony Zogby, was on the Board of BirdLife South Africa, and another, Dr Pete Zacharias, is a Trustee of the Lewis Foundation, which purchased BirdLife South Africa’s first headquarters and contributed to refurbishing Isdell House, the current headquarters.  Some of us are regulars on the ‘Flock’ sea voyages.  These relationships, independent of SHR, kept us abreast of important projects being planned or undertaken by BirdLife Africa.  This is how we were made aware of the intention to mount a mouse eradication project on Marion Island.  The project was just an ‘idea’ at that time.  Flock to Marion 2022 was not even on the horizon then!

It also coincided with our last raffle on our birding weekends, held in 2018, and we decided that we would dedicate the donation to the MFM Project.  I guess the motivation was that our Region is a conservation-minded group that derives considerable fundraising from birds and their conservation is important to us, as is our relationship with BirdLife South Africa. A number of us has since ‘bought’ hectares on Marion in our personal capacity and received a certificate of appreciation in recognition.  We are grateful to have now received a certificate acknowledging the West Rand Region’s 95-ha sponsorship for our trophy cabinet.  We are able to publicise the project and do so on an ongoing basis.  We also encourage guests on our birding weekends to give support.”

The MFM Project is most grateful for the ongoing support of the SANParks Honorary Rangers’ West Rand Region and thanks its Chairperson, Simon Ridge for writing the above.

The Sponsor a Hectare Campaign aims to raise 30 million Rands (at R 1000/ha) towards the total expected cost of the Mouse-Free Marion Project.  As such it gives an opportunity for the ordinary person to contribute towards eradicating Marion Island’s mice, either individually or on behalf of a group.  Every hectare helps!

However, there remains a pressing need to raise much larger sums by donating to the project (click here).  If you are in a position to be a major funder of the project, or might be able to suggest a possible source of a large donation, please make contact via Heidi Whitman, Mouse-Free Marion Project at Heidi.Whitman@mousefreemarion.org.  Thank you. 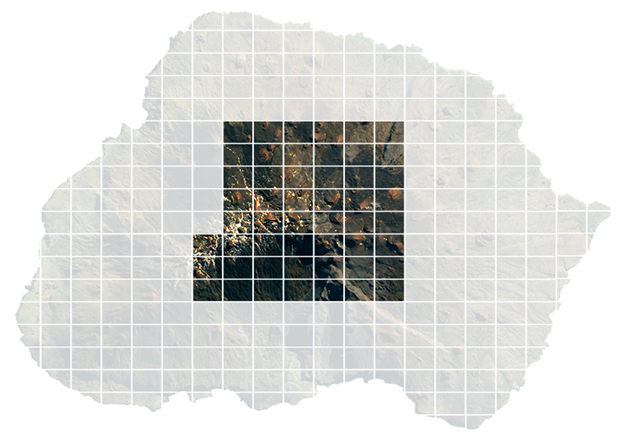 Still a long way to go to uncover the whole island!  Make your own hectare sponsorship here