Above Picture: The Rotary Club of Knights Pendragon has donated R 17 000 to the Mouse- Free Marion Project

In May this year, shortly after returning from a visit to Marion Island, Mouse-Free Marion Project Manager Anton Wolfaardt gave an online lecture on the project to the Rotary Club of Knights Pendragon, which is based in Edenvale, Gauteng, South Africa.  Following the lecture, the club’s Executive Secretary Jim Rankin wrote to Anton: “We had a whip around after you had left and managed to put together R 1000 to sponsor another hectare.  There is a possibility that we may be able to sponsor four more hectares soon”.  Following its initial 10-ha sponsorship made in April, the club has now sponsored 17 hectares towards ridding Marion of its mice.

Jim had earlier written to MFM News: “When the Mouse-Free Marion sponsorship was first mooted on the Flock at Sea Again! 2017 cruise, my wife Zen and I were at the front of the queue and [were] very early sponsors.  With the Flock to Marion 2022 cruise [then] coming up we as a Club decided to sponsor a hectare.  We, collectively, have a such a good chance to make a significant contribution to the environment by eliminating the mice on Marion Island.”

The Rotary Club of Knights Pendragon is a club within Rotary District 9400, which is one of 529 Rotary Districts with more than 32 000 clubs across the globe, all of which are members of Rotary International.  “Rotary is a global network of 1.4 million neighbours, friends, leaders, and problem-solvers who see a world where people unite and take action to create lasting change – across the globe, in our communities, and in ourselves.”  Fittingly one of Rotary International’s current seven “Avenues of Service” is directed at the environment.

Jim Rankin’s Rotary Club is not the only one in South Africa to make a sponsorship.  Tony Davidson of Rotary Club of Newlands has written to MFM News: “The Pinelands Rotary Club challenged us to buy a hectare, and we took up the challenge.  We invited Nini van der Merwe to speak to our club about the mouse problem on Marion Island.  Based on the talk we voted to donate a further R5000 to the project.” The club’s sponsorship now stands at six hectares. 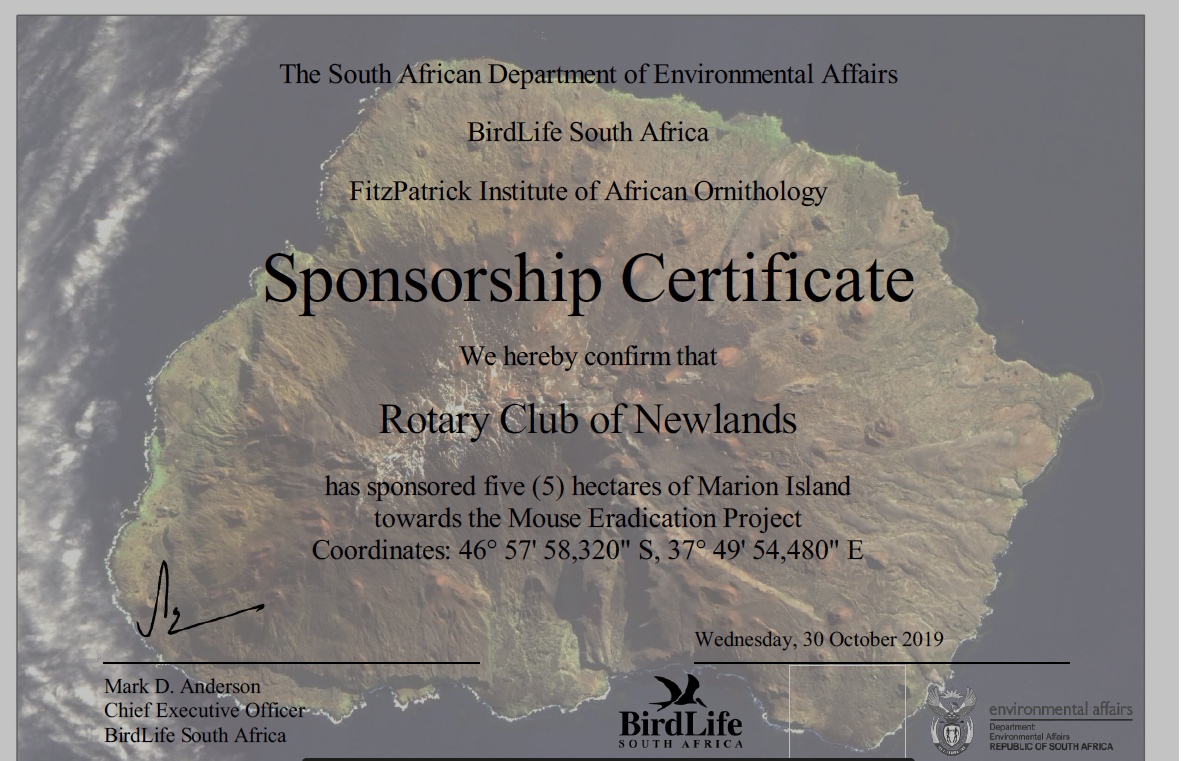 Jim Rankin of the Rotary Club of Knights Pendragon has informed MFM News it is issuing a challenge to the many more Rotary Clubs in South Africa, and around the world, to make their own hectare sponsorships to match (or even exceed) those already made by his and the four other clubs.

With thanks to Tony Davidson, Newlands Rotary Club and Jim Rankin, Rotary Club of Knights Pendragon.