Above picture: A bait bucket is swung into a load site to collect a load of bait

Note.  This is the second in a series of posts commissioned by MFM News from Mouse-Free Marion’s Operations Manager, Keith Springer, that gives details on aspects of the baiting eradication planned to rid Marion Island of its invasive House Mice.  The first post described the process being followed on the island to choose sites for field bait depots, based on the island’s geography.  In this post Keith describes how a bait-spreading bucket is designed for its task of spreading bait so not a single mouse in the field can escape encountering a bait pellet.  A following post will describe the actual aerial baiting process itself. 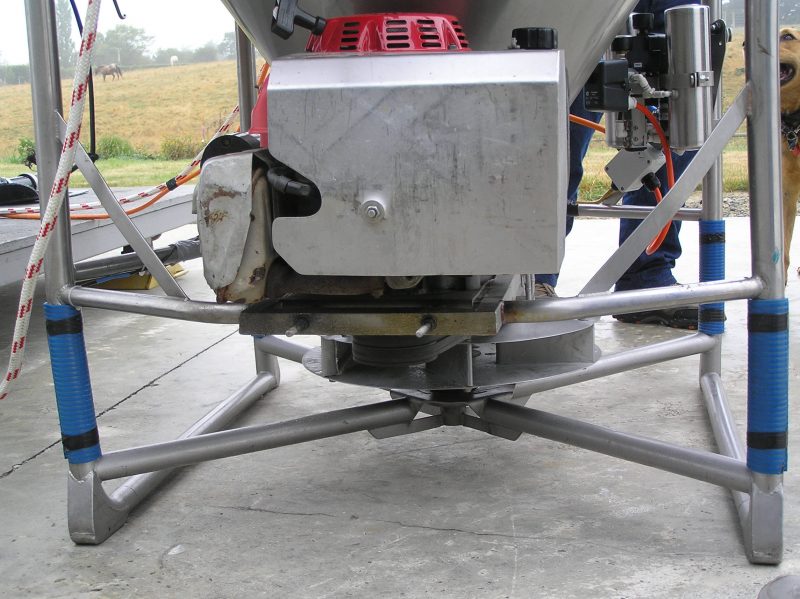 The engine on a bait bucket, with shield to prevent carburettor icing. The blue plastic taped to the bottom of the frame is to reduce bait pellets shattering as they are flung out by the spinner, seen underneath with its vanes visible

There are numerous components that comprise an aerial baiting operation targeting rodent eradication on islands. All those components must come together at the right time, at the right place, with the right people, and have the right weather to complete the work.  In this post we look at the role of a critical piece of equipment in getting the bait out to hungry rodents – the bait-spreading bucket, known more simply as a bait bucket.

A lot of attention gets paid to the beast with a rotor on top, that flies around the sky making a lot of noise.  And indeed, a helicopter in the hands of an experienced baiting pilot is an extremely effective platform upon which to base an aerial rodent eradication.  It is what hangs beneath the helicopter though, that is what delivers the bait to the rodents on the ground, in an even pattern that is distributed across the whole island.

A central tenet of rodent eradications is that every individual rodent must encounter (and consume) a lethal amount of bait.  When talking about House Mice, their territories can be very small, so a bait pellet – which is sufficient to kill a mouse using the formulation typically used in island eradication projects – needs to land in every potential mouse territory.

Modified from buckets designed to spread fertiliser on agricultural land and mounted on tractors, bait (or spreader) buckets were easily adapted for helicopter use, much as were monsoon buckets for aerial fire-fighting applications.  The same principles and components required to spread fertiliser are also applicable to distributing bait – an even and thorough coverage is required. 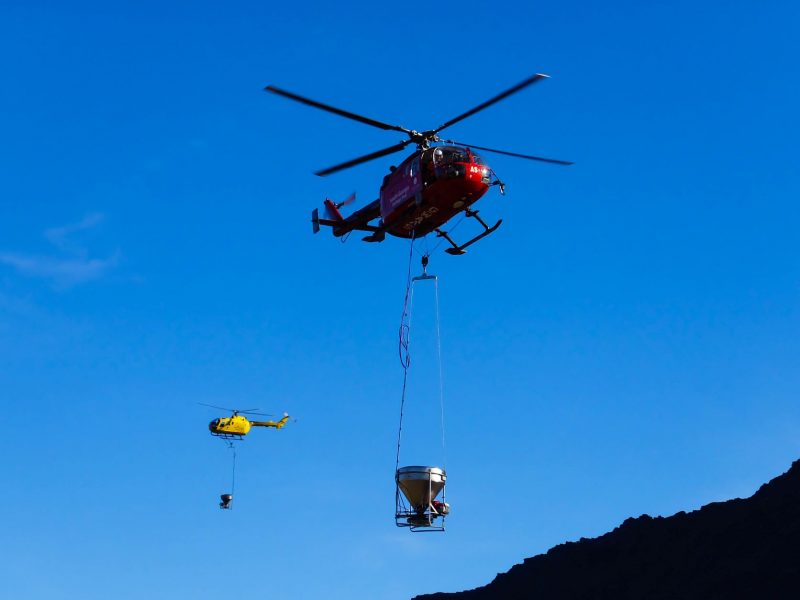 Two helicopters with underslung bait buckets approach a load site on South Georgia. The swingletree is clearly visible below the closer helicopter, as are the air hoses and electrical lead

At the bottom of the hopper, just above the throat (the narrow aperture at the bottom of the hopper, through which bait falls), is an agitator.  This rotates on a horizontal axis and has spikes around its axle. The agitator is turned by an electric motor which churns bait just above the throat to keep it moving and to prevent clogging (known as ‘bridging’) as bait pellets are about to fall through the throat.

Below the throat is a sliding gate – a sheet of flat stainless steel.  The gate is operated by the pilot, via compressed air hoses that can either be taken from the compressor on board the aircraft, or from an independent compressor located in the rear of the cabin.  When the pilot wants to fly without sowing bait, the gate is closed, so no bait can flow out.  When the pilot wants to commence bait spreading, the gate is opened and bait starts to fall through.  In the middle of the sliding gate is an aperture, through which bait flows.  The gate is designed to seat an interchangeable disc in it, and each disc has a different sized aperture in its centre. It is the size of the aperture in this disc that, combined with aircraft speed, determines the amount of bait flowing out of the bucket and onto the ground, and thus the application rate.  Changing the disc on most bucket designs is very straightforward and can be done in under a minute.  A low application rate might call for a disc aperture of around 50 mm, whereas an average rate (for rodent eradications) might be around 75 mm, and a high application rate over 100 mm.  Discs are graduated, usually in 2.5- to 5-mm increments, and a full set comes with each bucket. 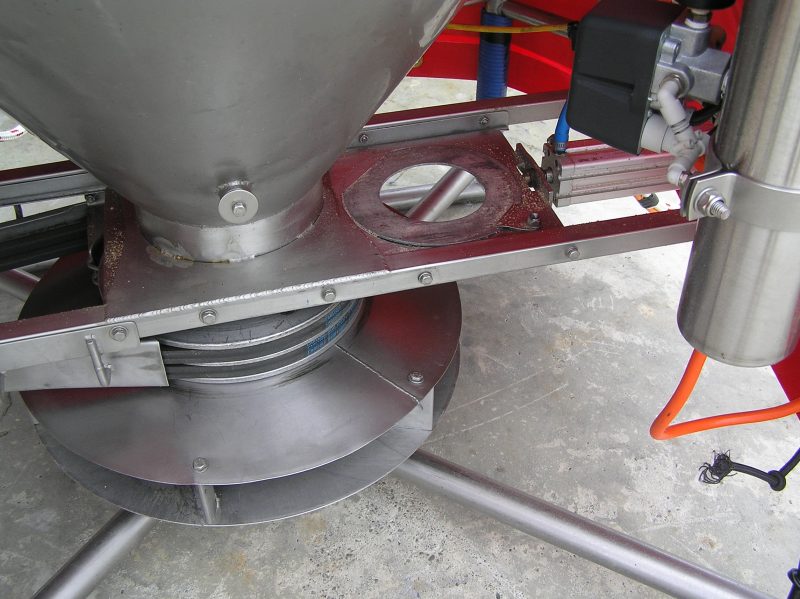 Visible here are the belts that drive the spinner, the spinner itself, and the air-powered sliding gate with an interchangeable disc fitted

Below the gate sits the spinner. This is effectively the business end of the bucket because it is what distributes the bait in a wide swath. The spinner is usually made of stainless steel and has a top and bottom plate, with internal vanes (or fins).  The spinner is driven by a petrol engine (of varying horsepower, depending on the bucket make and model) via V-belts. Increasing the engine revs makes the spinner spin faster.  As the bait falls through the aperture, it drops into the spinner, and the vanes flick out the bait pellets at high speed in a horizontal trajectory in a 360-degree pattern.  The engine is started by the ground team before the pilot lifts off with a load of bait, and it is refuelled at the same time as the helicopter. 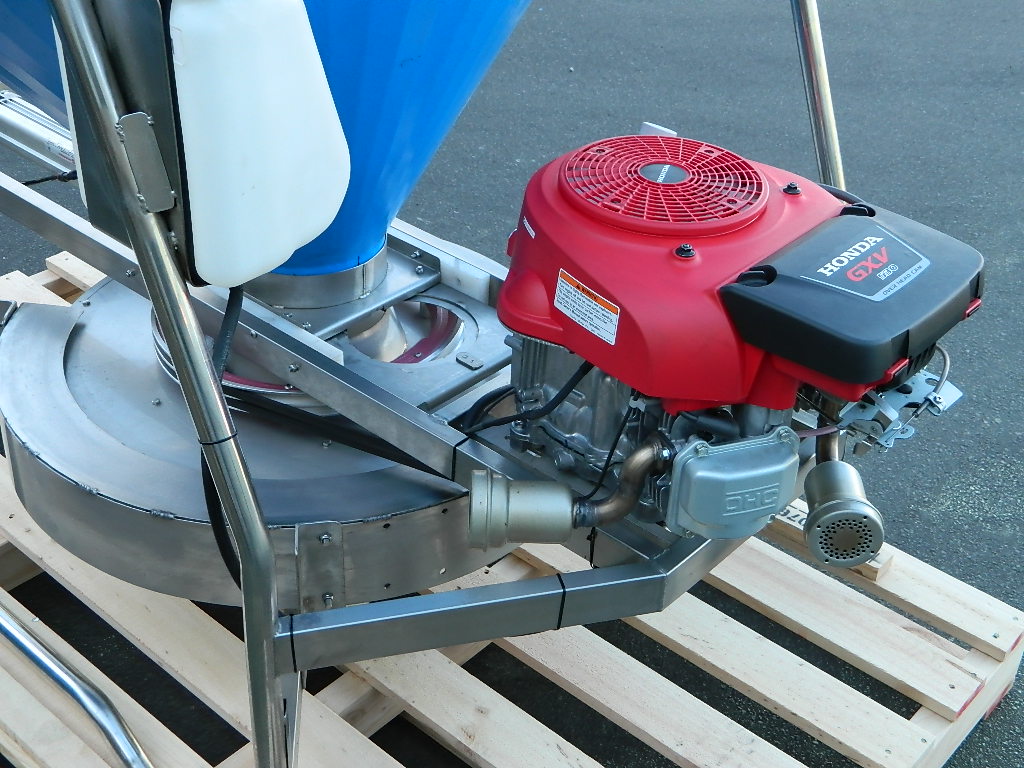 The business end of a bait bucket, showing the engine that drives the spinner and the V-belts that do so. The sliding gate is shown with no disc inserted, and an external deflector is attached around part of the spinner, to direct bait in the opposite direction

All of these components are mounted on a stainless-steel frame – the hopper, the engine, the spinner and the gate.  The frame also supports the electrical lead for the agitator and the compressed air hoses coming down from the aircraft above.  In some situations, a fin is fitted to the back of the frame (the engine faces into wind) to assist in keeping the bucket flying straight, especially when a deflector is being used, as this can alter the aerodynamics of the bucket. A windscreen is also fitted over the front of the engine to prevent carburettor icing.

There are a couple of variations on a standard swath width.  The first is when using a deflector bucket. The deflector is a semi-circular piece of steel that – depending on the bucket make and model – fits either inside or outside the spinner and is bolted in place.  This forces bait to be distributed on only one side of the helicopter, by preventing bait being distributed out one side of the bucket – the side facing away from the pilot.  Situations where a deflector bucket is used include a baiting run around the coastal margin, where it is undesirable to have bait spread into the ocean; and baiting of cliffs, where the bait is wanted on the cliff faces and not on the terrain away from them.

The second variation is a trickle bucket.  These days, it is usually the same bucket, but with the spinner engine idling.  This means the bait pellets are not flung out with such force, and instead of a swath width of say 80 m, a swath width of 10-15 m should result.  A trickle bucket might be used to bait a narrow rock stack off the shoreline for example, when it would be undesirable to use a full 80-m swath to cover a 20-m rock stack and have 60 m of bait dropped into the ocean (where there are no rodents to target).  Two passes with a trickle bucket can do the job instead and apply more bait where it is needed, instead of wasting some.