The event began with presentations from several young ocean scientists who spoke to the learners about possible career paths and study opportunities.  The learners were then given the opportunity to move in groups between tables manned by environmental NGOs, academia and government institutions.  Iziko Museums, the South African Environmental Observation Network (SAEON), Antarctic Legacy of South Africa and BirdLife South Africa’s Albatross Task Force were all represented at the event and had set up engaging displays that helped keep the 127 Grade 10, 11 and 12 learners from four schools fully involved for three and a half hours. 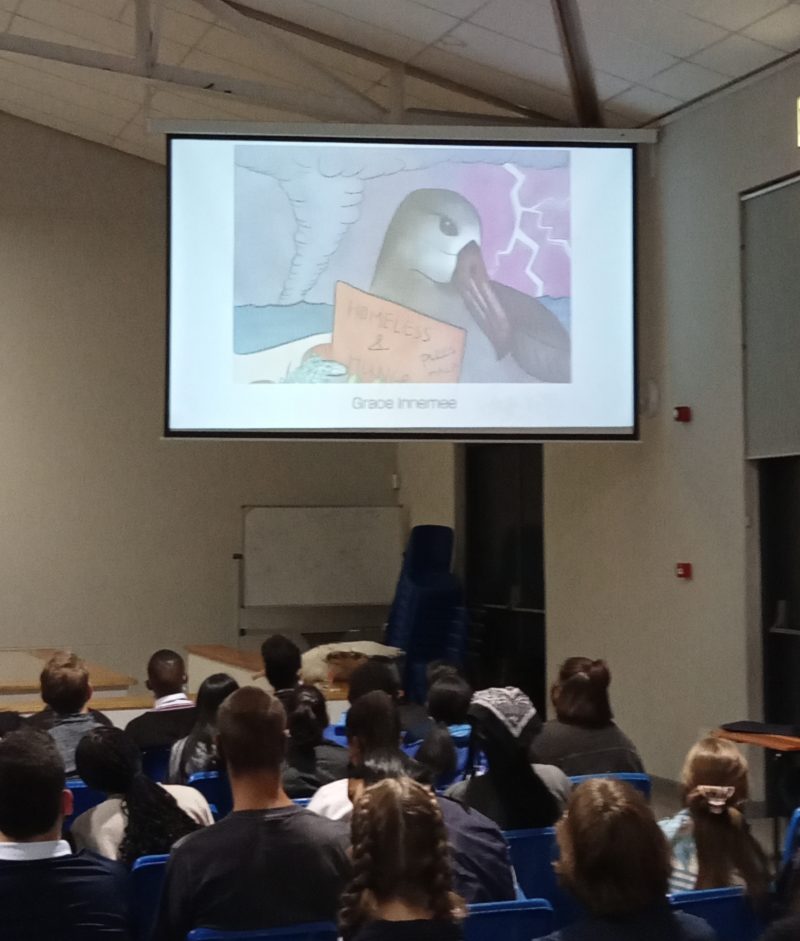 Watching the ACAP music video, with its theme of “Climate Change”

Wearing my “Albatross and Petrel Agreement cap” as ACAP’s honorary Information Officer, I took along this year’s music video “Life for the Albatross”, produced for World Albatross Day 2022 on 19 June, by artist Kitty Harvill and musician John Nicolosi and especially commissioned by ACAP from Artists and Biologists Unite for Nature (ABUN).  This was the five-minute video’s first public showing and it was well received.

Robyn Adams explains the Mouse-Free Marion Project to the learners

Robyn’s illustrated talk describing the risk Marion Island’s albatrosses and petrels face from mice followed and was met with audible gasps as photos of scalped albatross chicks appeared on the screen.  Unexpectedly, her presentation commenced with a message from Anton Wolfaardt, MFM Project Manager, recorded off Marion Island on the S.A. Agulhas II, where he was waiting to go ashore. 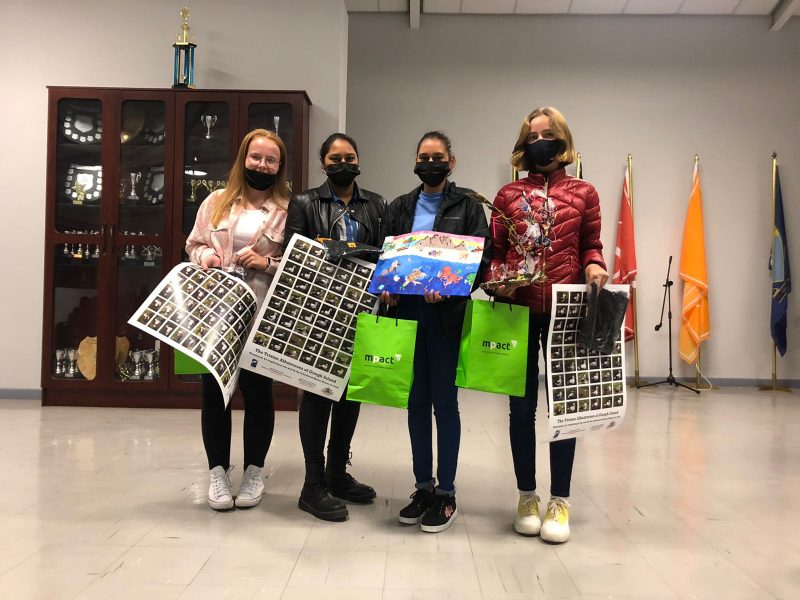 Then it was time to release the results of the art competition, to much cheering from the audience.  I had taken along copies of an ACAP poster that features 54 photos of individual Tristan Albatrosses, so each winner and runner up received one.  To end the evening, Mariëtte gave out small gifts to the speakers and the other contributors.  It must be the first time ever the MFM Project has been thanked with both chocolates and a standing ovation!

Mariëtte Wheeler is the 2021 winner of South Africa’s National Best Teacher category of the National Teacher Awards.  This category focused not only on in-class teaching but also the teachers’ other activities in the community, and local as well as international connections.  She writes “as the current National Best Teacher for South Africa, I am the official nominee of the Department of Basic Education to represent the country at the upcoming Global Teacher Prize.” Prior to her becoming a high school teacher she gained her PhD at Marion Island, studying the effects of human disturbance on the island’s albatrosses, petrels and fur seals – making her an excellent ambassador for the MFM Project.  I had the pleasure of accompanying Mariëtte in April 2005 on a Marion “round-island” hike helping with her field research, taking a week and staying overnight in coastal field huts.

The academy had organised a pancake table by Poppies Cafe, as well as a hot drink stand for the evening.  Sales, added to a raffle conducted among the learners and entry fees for the art competition, resulted in R 4000 being raised for the project and Protea Heights Academy will soon be receiving a Certificate of Appreciation for its four-hectare sponsorship.  Mariëtte says she will display it in her classroom for all her Marine Sciences learners to see.  Send us a photo once it’s up!

Read about an earlier collaboration between ACAP and Protea Heights Academy to mark World Albatross Day in 2020 here.