Above picture:  A notice board on the shore of Midway Atoll’s Sand Island

Midway Atoll is located 2000 km north-west of the main Hawaiian Islands and is the second to last island in the chain of low-lying atolls that make up the USA’s Papahānaumokuākea Marine National Monument.  The atoll consists of three islands: Sand (450 ha), Eastern (130 ha) and Spit (7 ha).  The islands are mostly low-lying, and the history of human presence is evident everywhere you look.   Midway was historically a military station and was the staging ground for one of the most pivotal battles in World War II (the eponymous Battle of Midway in June 1942).  I’ve been told that the island once had enough infrastructure to support 5000 people before it was transferred from the United States Navy to the Fish and Wildlife Service (FWS) in 1996.  Since then, the atoll has been managed as a National Memorial, as a site of an emergency runway, and as a National Wildlife Refuge dedicated to protecting and restoring the habitat for its plants and animals.  Today, roughly 45 people live on Midway – all working to support the functions of the island. 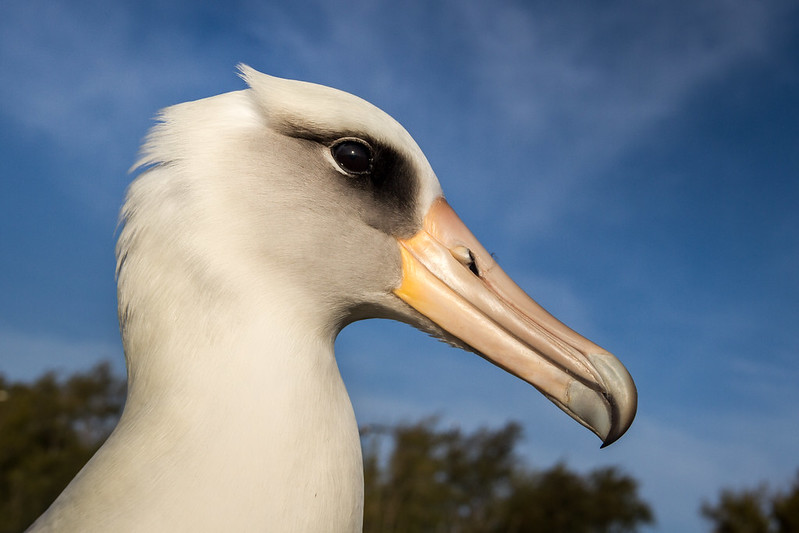 A Laysan Albatross on Midway Atoll

Each year over 400 000 pairs of Laysan Albatrosses Phoebastria immutabilis return to Midway to nest and raise their chicks, and seemingly equal numbers of Bonin Petrels Pterodroma hypoleuca dig burrows to contain their nests.  These are the two most populous species although several other seabirds also rely on the atoll for breeding, including Black footed Albatrosses, Phoebastria nigripes, Black Anous minutus and Brown A. stolidus Noddies, Common White Terns Gygis alba and Wedge-tailed Shearwaters Ardenna pacifica , as well as a solitary pair of globally Vulnerable Short-tailed Albatrosses Phoebastria albatrus, known affectionately as George and Geraldine.  Several species of migratory shorebirds rely on the atoll as a wintering ground, including Near Threatened Bristle-thighed Curlews Numenius tahitiensis, Ruddy Turnstones Arenaria interpres and Pacific Golden Plovers Pluvialis fulva. 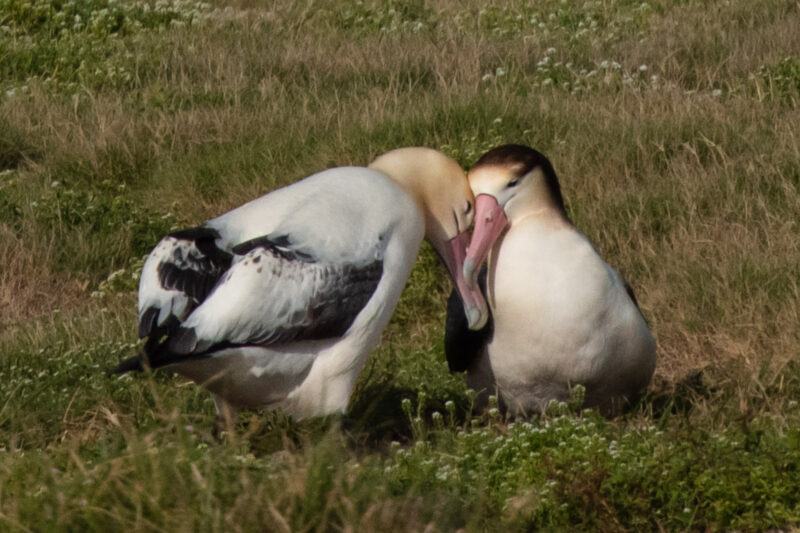 Short-tailed Albatrosses George (left) and Geraldine together on Sand Island in October 2021, photograph by Jon Brack and Friends of Midway Atoll

Not surprisingly, the long history of human use and impact includes the introduction of several invasive species.  Black Rats Rattus rattus were eradicated from the atoll using bait stations in 1995 and an ongoing project to eradicate the invasive weed Golden Crownbeard Verbesina encelioides is steadily improving the look and ecology of both Sand and Eastern Islands.  House Mice Mus musculus are present on Sand Island (which is also where the people live), and several years ago began to attack and kill adult albatrosses as they sat on their nests (click here).  The first year this was observed was in the 2015/2016 breeding season when the impact was relatively limited with at least 42 birds bitten and killed, but the following year the problem increased drastically to at least 242 dead adults and over 1200 recorded bites.  In the years since there have been few to no attacks.  This is likely due to prophylactic ground-baiting treatments that reduced the mouse population in high-risk times and areas, but ultimately we don’t know what factors lead to mice attacking the birds. 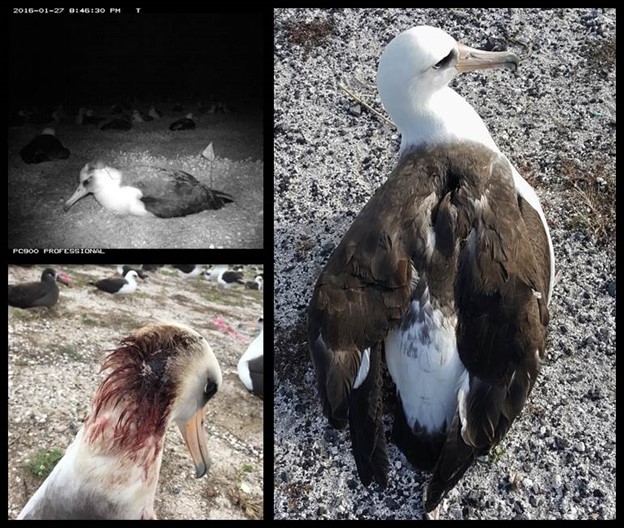 Attacks by House Mice on Midway’s Laysan Albatrosses, photographs from the US Fish & Wildlife Service

Since 2017 the FWS has been leading efforts to plan and implement a project to eradicate mice from Sand Island, and thus the Atoll.  Island Conservation, a non-profit organization whose mission is to prevent extinctions, has partnered with the FWS and other agencies in this endeavour.  I’ve been lucky enough to serve as Island Conservation’s lead for the Midway Seabird Protection Project and I look forward to seeing the day where we can declare the project a success.

The first several years of the planning process were spent undertaking various field and laboratory studies, developing operational plans, collecting baseline data, and supporting the United States’ federal environmental compliance process.  By mid-2019 the project partnership felt we had the pieces in place to push towards project implementation in 2020.  Things were well on the way in March 2020 when we were forced to postpone due to the COVID-19 pandemic.  This delay ended up lasting several years due to ongoing health risks and the inability to source key project materials, but things now look good for implementing the eradication activities in 2023 and we are working hard to make it happen.

Our plans are designed around the principles that are required for any project to eradicate an invasive rodent on an island.  Our chosen strategy is in line with other successful eradication projects but is tailored to the unique circumstance and challenges we face on Midway.  We will remove the mice by making a rodenticide cereal-based bait available to all mice on Sand Island while managing the risk to non-target species.  The primary method of distributing the bait will be by helicopter with an underslung bait-spreading bucket. 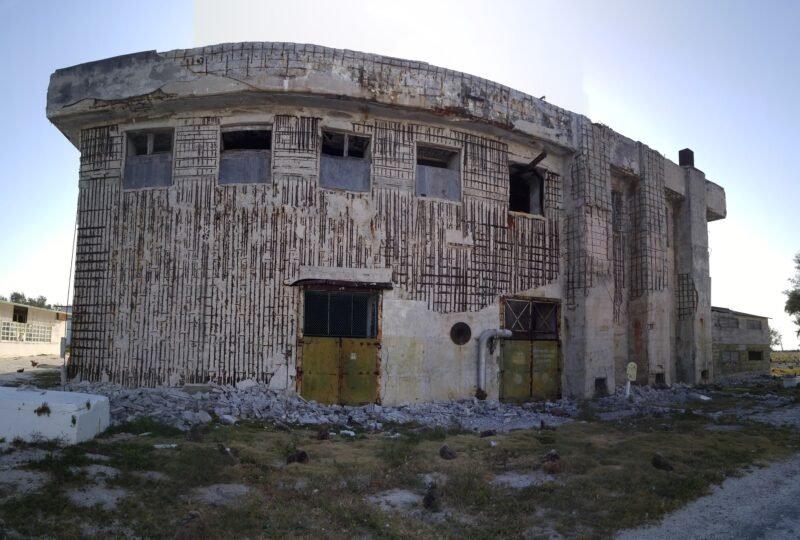 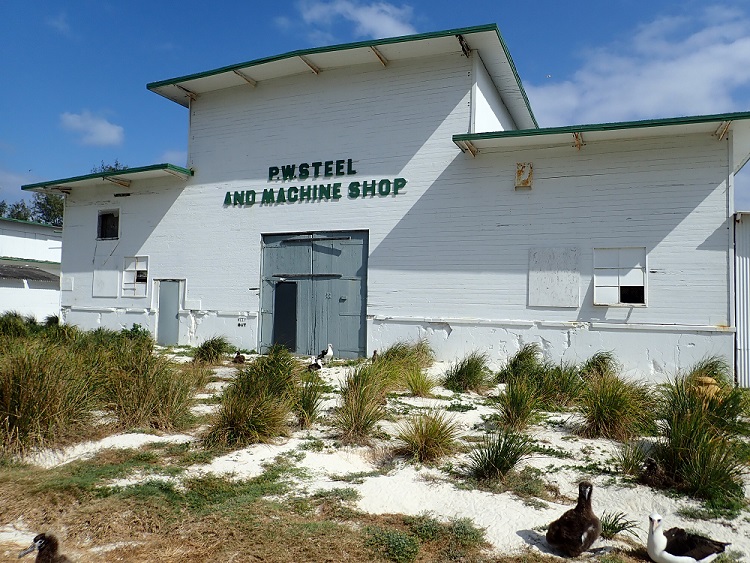 Midway has a significant amount of human infrastructure that cannot be baited by helicopter.  Most is left over from the military and although much is still in use, there are also abandoned and unused buildings to consider.  We will address these circumstances with a dedicated team that will deploy and maintain over 3000 bait stations at a high density in all known infrastructures.  There are also over 300 underground access points to sewer, water and electricity facilities that have been assessed and will be baited as appropriate.

A significant challenge that we face on Midway is an abundance of invertebrates that will consume the bait pellets.  Land crabs have been significant bait consumers on other tropical islands, but on Midway the issue is with smaller species such as cockroaches, beetles and isopods.  Invertebrates aren’t harmed by the rodenticide in the bait but can interfere with it being available to every mouse.  We will compensate for this by increasing our bait application rate and applying bait three times in the highest risk areas over the course of three weeks (the rest of the island will be baited twice). 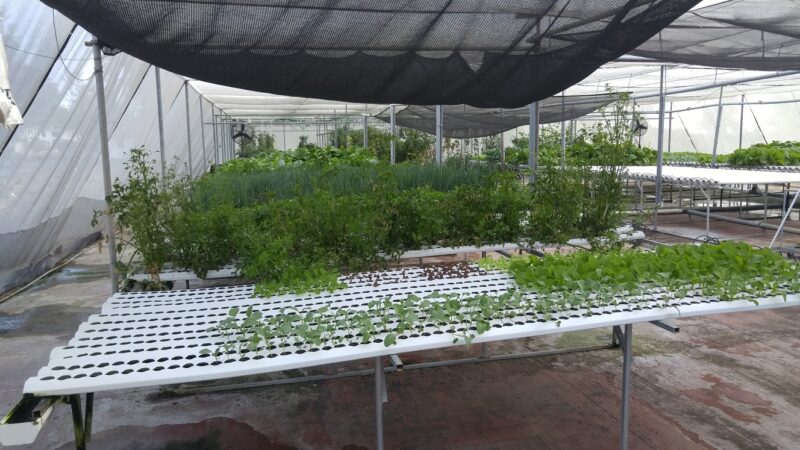 Midway’s hydroponic garden will be deactivated for the bait drop

With human presence and infrastructure comes human-based food sources.  These are often highly palatable to mice and may deter their choosing to eat the bait pellets.  So, we have an extensive plan to manage the risk from human foods.  This includes closely controlling all trash and incinerating all food waste, providing everyone with storage containers for food, and a process to monitor and inspect for risks.  In short, all food and food waste will be stored in rodent-resistant containers at all times, and there will be a team dedicated to ensuring compliance.  There is also food grown on Midway in the form of some small gardens and an impressive hydroponic garden.   These will all be temporarily deactivated during the project, since mice are known to eat the fruits and vegetables that are grown on Sand Island. 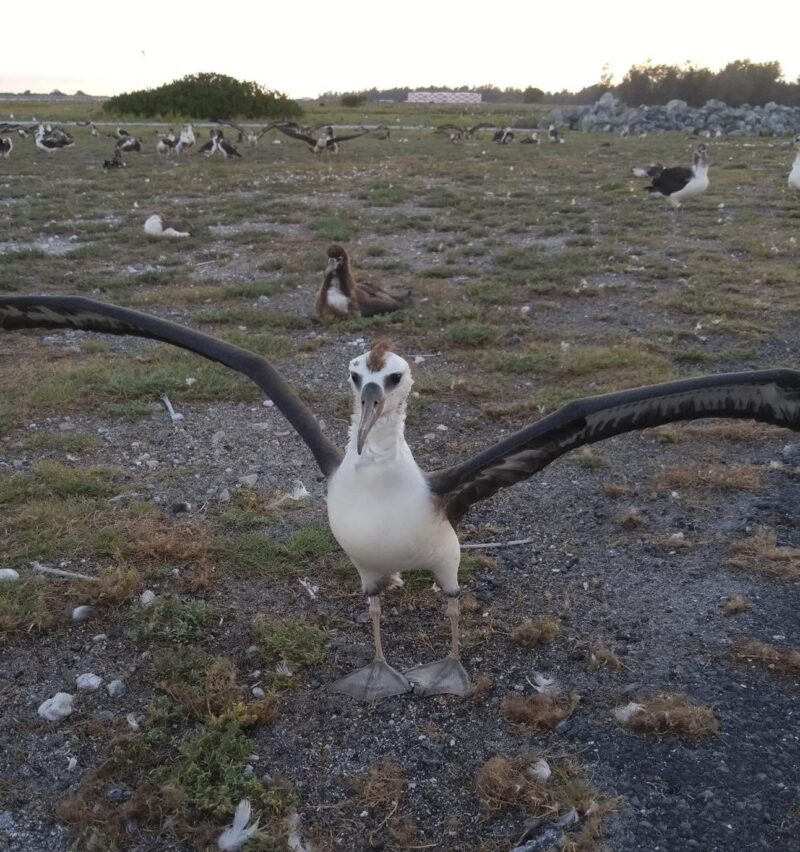 So far, I’ve focused on describing the plans related to completely removing the mice, but an equally significant part of the project is protecting other species from possible harm.  The timing of our operation in July and August will allow us to complete the operation as albatross numbers are reducing as birds fledge and while the migratory shorebirds are away for the summer.  However, Midway is home to over half the global population of the Critically Endangered Laysan Duck Anas laysanensis, which lives on the atoll year-round.  To manage risks to the ducks there will be a dedicated on-island team that will capture all the ducks on Sand Island and relocate them temporarily to mouse-free Eastern Island.  Additional food, water and cover have been created on Eastern Island to support the ducks, which will have their flight feathers trimmed so they can’t fly back to Sand Island.  The team will continue to monitor and support the ducks on Eastern Island until monitoring data suggest it is safe to return them to Sand Island. 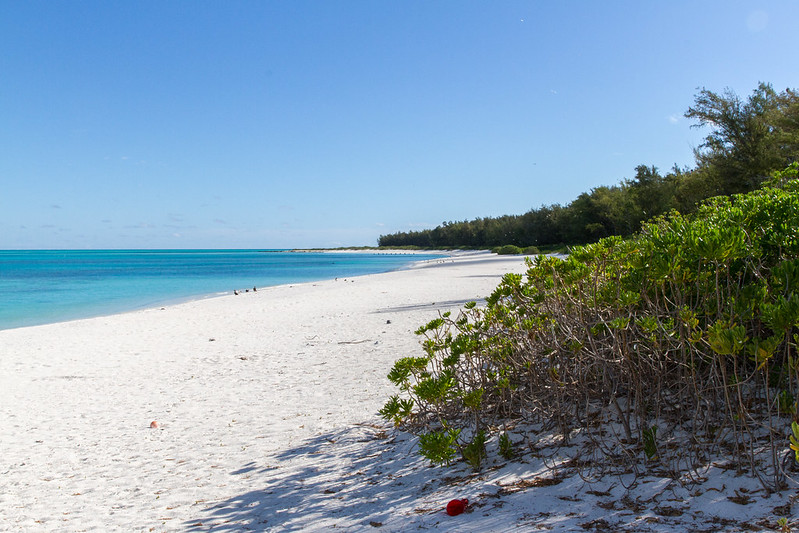 A pristine-looking beach on Midway’s Sand Island, unless otherwise assigned, all photographs by Wesley Jolley

We’ve set out to undertake an ambitious and complicated project, but these words can be used to describe most projects of this sort.  It will all be worth it in the end when we can declare the eradication project on Midway a success.  In doing so, we will protect the species that live there from future impacts by mice, possibly create new opportunities for smaller seabirds to return, and establish the entire Northwestern Hawaiian Islands as free from invasive mammals.

Editorial Note:  The Mouse-Free Marion Project wishes the Midway Seabird Protection Project every success for next year and looks forward to learning from Wes and his colleagues as they work towards eradicating House Mice on Midway.