When did the mice arrive on Marion Island? As it turns out, very early indeed

Marion and Prince Edward Islands were first definitely discovered on 13 January 1772 when France’s Marion du Fresne visited, without landing, in the frigates Mascarin and Marquis de Castries.  This followed a much earlier possible record, when a Dutch East Indiaman, the Maerseveen, sighted two islands on 4 March 1663 in the southern Indian Ocean, but at a distance from the position of the Prince Edward Island group.  Nearly five years after du Fresne on 12 December 1776 the well-known English explorer, James Cook, sailed past in the Resolution and Discovery on his third (and final) voyage of discovery.  Cook named them the Prince Edward Isles, after the fourth son of King George III (and father of Queen Victoria), but again affected no landing. 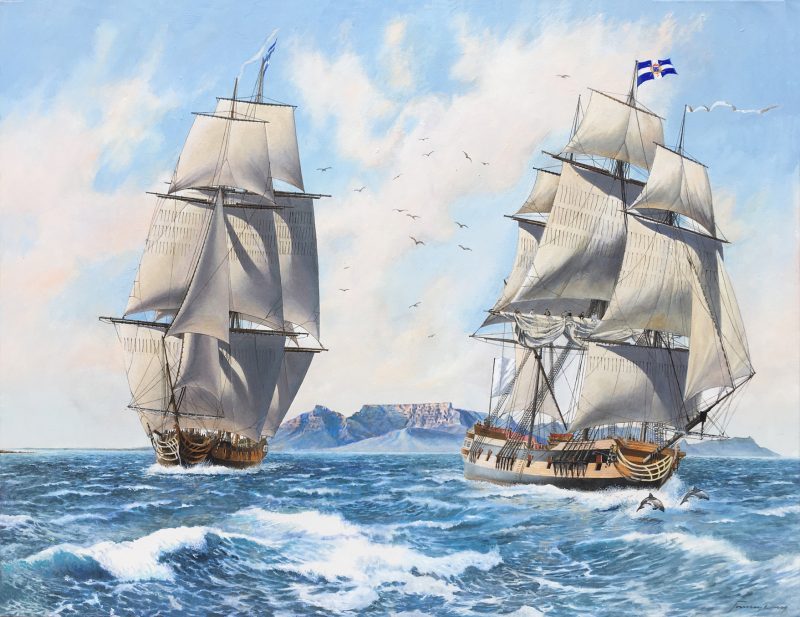 The French frigates Mascarin and Marquis de Castries depart from South Africa’s Table Bay on their way to discover the Prince Edward Islands in January 1772, artwork by Jeremy Day, courtesy of Sydney Cullis

The next known visit is of a French expedition on the Sally which arrived on 10 February 1800, but did not send men ashore.  The earliest known landings on the island group found to date are for the austral summer of 1803/04, when sealing took place ashore from the American ships Catherine, under Henry Fanning, and the Union, under Isaac Pendleton.  It is noteworthy that no claim was made by either to be “first footers”, so it is most likely that earlier sealing landings had been made.  Indeed, Fanning talks of finding “sealers’ establishments” ashore, although no records pertaining to them have as yet been traced in maritime archives.  Over the next decade and a half at least four (but likely many more) American sealing vessels visited the islands, leaving the year ‘1806’ carved into a rock ledge on Prince Edward Island.  The islands were not individually named by Cook (calling the larger island “Marion” only became common from the 1840s), so it is rarely certain which sealing vessel visited which island (although some are known to have visited both, as would be expected given their proximity).

We are fortunate to have a detailed first-person account by a young sealer who spent 20 months over 1818/20 ashore on the larger “south island” (i.e. Marion), having been landed from the American brig Pickering in August 1818.  Setting up camp in what is pretty certainly Sealer’s Cave in Marion’s south-east quadrant, William Phelps soon noticed the mice.  He writes under the pseudonym of “Webfoot”:

“… the whole island was infested with common house-mice, which had … been introduced from some sailing vessel, probably with the stores of the gang; and they had multiplied until their name was legion.  They thickly populated the beaches, and inhabited the caves; they burrowed with the birds in the banks, and were found among the snows of the mountains” (p. 47).

This suggests the mice had been on the island for a few years at least so it reasonably safe to assume they arrived within a decade of the earliest landings.  Fortunately, Prince Edward Island escaped Marion’s fate and has always been mouse free.

What can we say about the original source of Marion’s mice?  A genetic study by South African researchers Bettine van Vuuren and Stephen Chown published in 2007 considered the mice were of a strain from Scandinavia.  But given the cosmopolitan nature of maritime activities, this does not confirm an actual source.  Perhaps more likely they came from the eastern seaboard of the United States where the American sealers had their home ports.

Future posts to MFM News aim to talk about the mice from the time of South Africa’s annexation of the islands in 1947/48 (leading directly to the import of domestic cats), the research that has been conducted on them over the years that led to the awarding of a PhD and two MSc degrees, the early concern about their deleterious effects, and early planning towards their eradication that led to the establishment of the Mouse-Free Marion Project.