Above picture: Pamela and Neville Isdell during a visit to the Kalahari in 2020.  Photo; Mark D. Anderson

The Mouse-Free Marion Project is excited to announce that its ‘Sponsor a Hectare’ campaign that aims to raise thirty million South African Rands towards the eradication of the island’s predatory mice has received its largest sponsorship to date.  In two tranches, Pamela Isdell has joined the ‘100+ ha Club’ by sponsoring 150 hectares with a magnificent R150 000 donation.  She becomes only the fourth member of the “club”, which she now leads.

Pamela Isdell, and her husband Neville, are well known to BirdLife South Africa.  They are passionate conservationists who support a number of important conservation projects in Africa.  Pamela is one of the organisation’s four Honorary Patrons, along with Dr Precious Moloi-Motsepe, Gaynor Rupert and Mark Shuttleworth.

Pamela Isdell loves Africa and its natural environment, hence her commitment to supporting a number of important bird conservation initiatives

In thanking Pamela Isdell, we asked her what motivated her sponsorship.  In reply she stated “Certainly the news that a young man [Roeloff Botha who has sponsored 110 ha] has been so generous inspired me to follow his example as well as the terrible pictures of the chicks being attacked”.  She continued “I believe BirdLife South Africa under the leadership of Mark Anderson along with his amazing team can help to protect South Africa’s wonderful birdlife and he has inspired me to understand how vital it is to support them whether they be vultures, flamingos, penguins or albatrosses.  Marion Island is such a crucial habitat for nesting seabirds and the mice as well as climate change is decimating the island’s flora and fauna.  Time to act while we can”. 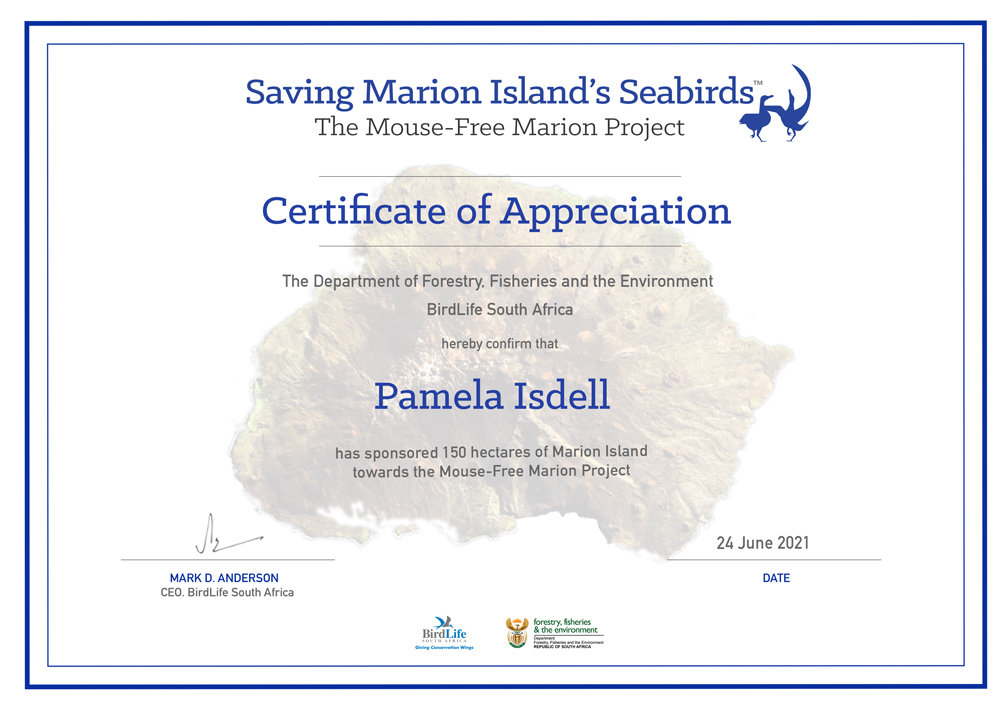 The Mouse-Free Marion Project is extremely grateful to Pamela Isdell for her sponsorship.  As she was inspired by a generous sponsor to make her own, the project trusts that her contribution will in turn inspire others to make sponsorships, be it a single hectare or as much as one hundred.  So far 2260 ha (7.5%) of the island’s 30 000 hectares have been funded (by over 800 sponsors) through the campaign, so there is still a long way to go.