Above Picture:  Members and friends of the eShowe Bird and Wildlife Club held a club meeting after the Flock to Marion 2022 voyage

The eShowe Bird and Wildlife Club, based in KwaZulu-Natal, has contributed R5060 to the MFM Project, thus sponsoring five hectares.  Vanessa Meyer of the eShowe-based club (which is not currently affiliated to BirdLife South Africa) writes to MFM News “My husband and I went on the Flock to Marion 2022 cruise and were quite blown away by it all and the majestic albatrosses, as well as the talks on board.  My talk at our little club was to raise awareness about the mice and was well received.”  Vanessa also thanks the club’s Chair, Beth Burger, for making the donation possible.

Another bird club, BirdLife Polokwane based in Limpopo Province, has sponsored five hectares.  The club’s Jody de Bruyn has written to Mark Anderson, BirdLife South Africa’s Chief Executive Officer and Chair of the Mouse-Free Marion Management Committee: “I have spoken to our club committee, and we have decided to make a donation of R5000 towards the mouse eradication project on Marion.  I will push for another budget review around June and see if we can do another donation of R5000 around July.  I know that these aren’t large amounts, but also know that every R1 counts in the end.  It’s the right thing to do.”

Derek Engelbrecht of BirdLife Polokwane has also been in contact with MFM News, writing: “Apart from our moral obligation to conserve seabirds whose survival we as humans jeopardised through the introduction of alien species, it is also gives me great pleasure to know that as a bird club, we can be part of history.  We know when and how these pests were introduced, and future generations will know that our generation threw everything at it to Save our Seabirds by ridding the island of these pests.  Bird clubs are also, by their very nature, conservation organisations and we cannot turn a blind eye to what is happening on the island.  If we are successful, perhaps they can put a memorial wall or stone there with the names of the sponsors.”  With all the support being received from bird clubs, it will have to be a pretty large donor board! 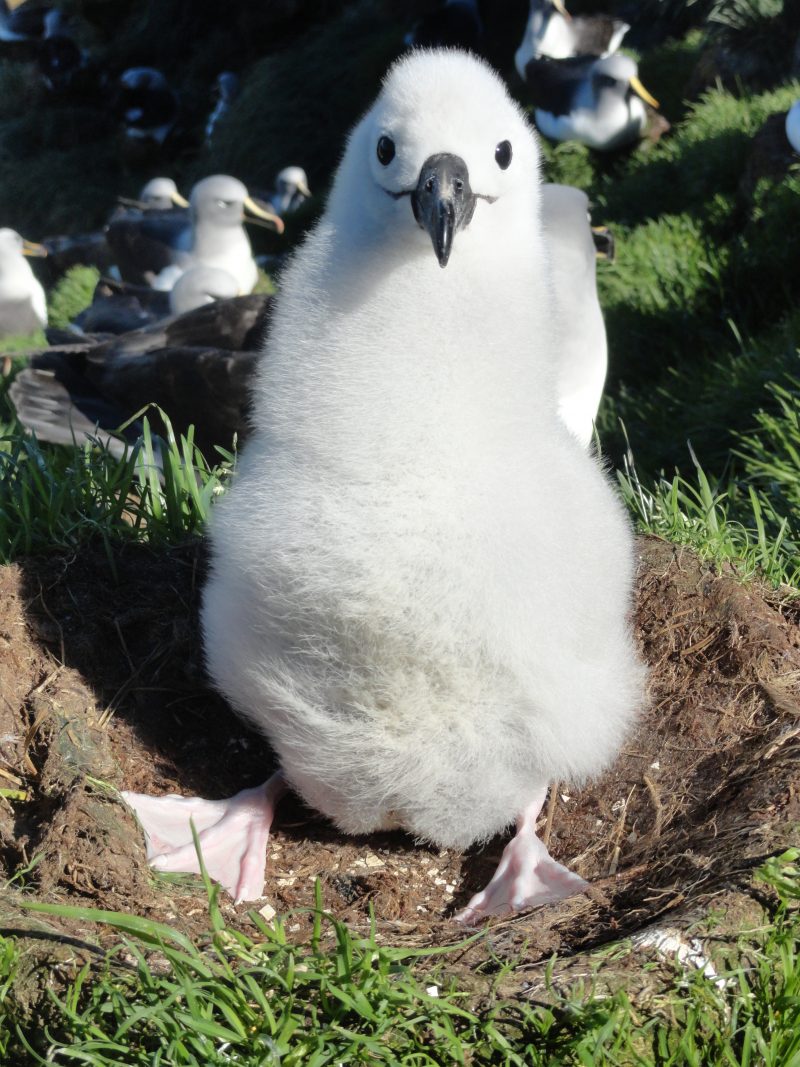 At risk to mice: a Grey-headed Albatross chick sits up on its nest on Marion Island; photograph by Kim Stevens

Lastly, BirdLife eThekwini KZN, one of the oldest affiliated bird clubs in South Africa, has also stepped up with a most welcome 32-ha sponsorship, making it the most generous club to date.  According to its Chair, Nicolette Forbes, the club sponsored 20 ha while on the Flock voyage, to add to the 12 ha it had previously sponsored, saying it is “incredibly proud” to have done so.  Chapeau!

Mark Anderson has written to those bird clubs in South Africa that had then not yet sponsored hectares with a direct appeal to do so (click here).  With only 16 affiliated clubs still to give their support, the whole MFM team looks forward to their positive replies and a “full house” of 40 bird clubs helping to save Marion’s albatrosses and petrels!