Climate emergency: COP27 and the importance of safeguarding Marion Island

Above picture: Young Wandering Albatrossses on Marion Island are increasingly at risk of mouse attacks due to climate change. Photograph: Ben Dilley

Sunday the 6th of November marked the start of COP27, the 2022 United Nations Climate Change Conference. For two weeks, world leaders, policy makers, civil society representatives and climate activists will gather in Sharm El-Sheikh, Egypt, to discuss climate change and to find and implement solutions to the climate crisis. Parties will deliberate on rising greenhouse gas emissions, climate mitigation strategies, adaptation measures and building resilience in the face of inevitable climate change. COP27 seeks to build on the outcomes of previous conferences to deliver actions critical to tackling the climate crisis.

Climate change is impacting the world as we know it. It is the most significant threat facing the health of our planet. Extreme weather events, changing temperatures and rising sea levels will permanently alter landscapes while shifting species distributions, foraging patterns and migration routes. Urgent interventions are critical to ameliorate the worst of these drastic impacts on landscapes, wildlife and communities.

With the Mouse-Free Marion Project being undertaken in the Southern Ocean, we are acutely aware of the visible and incremental impact of climate change on Marion Island and its threatened species. For many years, the Prince Edward Island group has been critical in South Africa’s climate research strategy and is known as a ‘sentinel of climate change’. As the group lies in an area within a very narrow range of air and sea temperatures, environmental variations due to changes in climate are highly noticeable. This is key for predicting future changes in climatic patterns.

At present, the islands are experiencing shifts in the ocean environment as a result of a changing climate. Medium-scale oceanographic regimes have been demonstrably shifting, altering productivity patterns and food availability for seabirds foraging in offshore waters. Consequently, some of Marion Island’s seabird species have recently decreased dramatically, with Macaroni Penguin numbers dropping by 30% and Rockhopper Penguins by 70%.

The above figure from Shangheta 2021 shows the long-term change in rainfall at the Prince Edward Islands showing a noticeable decrease in rainfall and a drier Marion Island.

These environmental changes, due to rising temperatures and associated oceanographic impacts, are also noticeable on land at Marion Island. A warmer and drier climate has improved conditions for invasive house mice, a species accidentally introduced to Marion Island by seal hunters in the early 19th century. The changing climatic conditions has led to a longer breeding season for mice and has boosted their population. With invertebrate populations rapidly decreasing due to increased predation by higher densities of mice, attacks on vulnerable seabirds have become more frequent and extensive since first being observed in the early 2000s. This impact is expected to become more severe as the climate continues to change, and experts warn that the majority of Marion Island’s iconic seabirds face local extinction in the presence of these invasive predators. 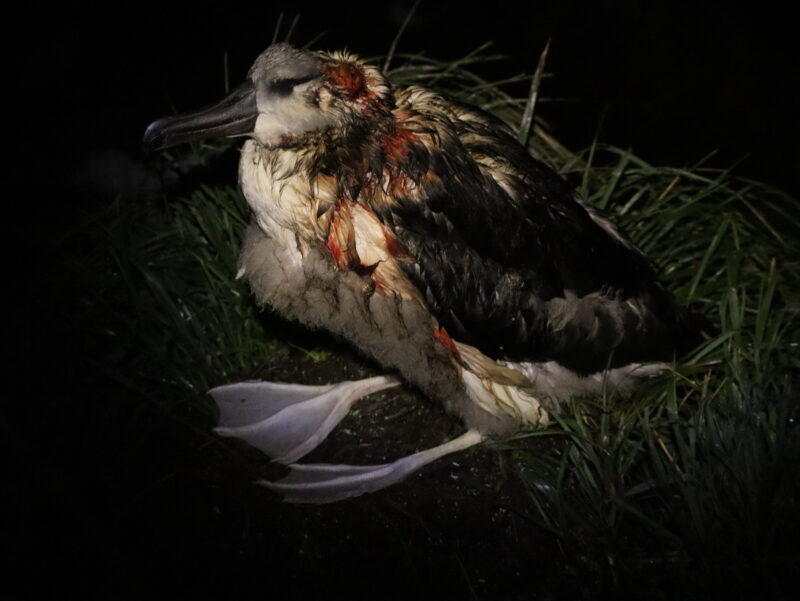 Above image: A Grey-headed Albatross fledgling has to contend with predatory visits by House Mice on Marion Island. Photograph Stefan Schoombie

Seabirds are considered to be the most threatened group of birds in the world, facing compounding threats, from predation by invasive species at their breeding grounds to interactions with fisheries and climate change. The eradication of invasive species is one of the most tractable of these threats, and helps strengthen the resilience of seabirds and island ecosystems to climate change and other threats. Removing invasive species at islands has shown remarkable outcomes for seabirds and island conservation. For example, at Lord Howe Island Island in Australia, the breeding success of Black-winged Petrels improved from 2.4% to 67% following the eradication of rodents. This is one of many examples, and Marion Island could see a similar result following the eradication of mice from the island. A once-off eradication intervention will ensure safe breeding grounds for millions of seabirds, including one quarter of the world’s Wandering Albatrosses. Removing mice will be a massive contribution towards the ecological restoration of Marion Island and will help build resilience amongst the island’s seabirds against climate change and potential extinction.

It is clear that we need to act urgently to avert the climate crisis, including by protecting wild places where nature thrives. Islands are global hotspots for biodiversity and extinction. While global climate mitigation measures and climate adaptation action plans will be discussed at the intergovernmental level at COP27, there are local interventions that can be made to ensure species resilience at a broader level. By bringing about a mouse-free Marion Island, we can equip the island’s globally important seabirds and other biodiversity with a head start in preparation for the anticipated pressures they will face as a result of climate change.